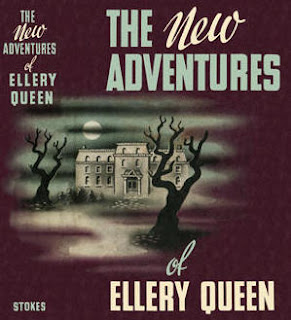 dustjackets.com
About the author: Ellery Queen is a crime fiction pseudonym created in 1929 by Frederic Dannay and Manfred Bennington Lee, and later used by other authors under Dannay and Lee's supervision. Dannay and Lee's main fictional character, whom they also named Ellery Queen, is a mystery writer in New York City who helps his police inspector father solve baffling murders. (from Wikipedia - full article).
Synopsis: This is a collection of a novella (The Lamp of God) and eight short stories; four of which are sports-related (baseball, football, prizefighting, and horse racing).
The Lamp of God (Novella): Ellery Queen is asked to accompany lawyer Thorne on a mission to pick up Alice Mayhew, coming from England by ocean liner, and bring her to the estate of her late father, Sylvester Mayhew. They drive to remote Long Island to find the estate consists of two houses, the older "Black House" and a more modern "White House." Sylvester lived and died in the Black House, now a derelict shambles. His family lives in the White House. Sylvester claimed to have converted his fortune into gold for Alice, his heir, and hidden it in the Black House. Ellery, Thorne, and Alice are put up in the White House. In the mornng they discover the entire Black House has completely disappeared, and likely the gold has disappeared with it.
The Treasure Hunt: Ellery visits retired military man Major-General Barrett in his fortress-like home on the Hudson River. Barrett's daughter, Leonie, discovers her $25,000 pearl necklace missing. The grounds and persons are thoroughly searched, but it cannot be found, and it is proven no one could have entered or left the estate.
The Hollow Dragon: Mr. Jito Kagiwa disppears suddenly from his Westchester home, along with a large, heavy doorstop decorated with dragons. Bill Gallant, Kagiwa's stepson, offers an explanation but Ellery is skeptical. Kagiwa is later found dead.
The House of Darkness: Ellery and Djuna take a day off to visit the amusement park. In the haunted house, they find a dead body. A man had been shot in complete darkness, but how?
The Bleeding Portrait: Ellery visits Lord Gramerton's home where a legend surrounds an oil painting of the patriarch: that the portrait bleeds whenever the current Lord Gramerton's wife is unfaithful. While Ellery is there, it happens again.
Man Bites Dog: Ellery attends a New York Yankees game. Ex-pitcher Big Bill Tree is in an adjacent box with his girlfriend, and his wife is also attending. Bill falls dead after eating a ballpark hot dog.
The Long Shot: Ellery visits a race track and works with a desperate owner who has one chance left, to win the race and the big purse.
Mind over Matter: A prizefighter is beaten by a challenger, and found dead in his car, parked next to Ellery's. Ellery's missing coat provides the vital clue.
The Trojan Horse: A football team tries to maintain its winning Rose Bowl record, and in the midst of it a collection of precious jewels goes missing.
Review: I had earlier reviewed the first set of short stories, The Adventures of Ellery Queen (1934), and found them lacking due to racial stereotypes, cruelty to animals, and other issues; and so hoped this later collection to be an improvement. It is, although it still contains racist language not used today.
The Lamp of God has such a unique solution I remembered it from reading it 20 years ago, still a solid story. My favorite of the collection is The House of Darkness, with great descriptions of the haunted house setup in the amusement park. The Trojan Horse was very good - even though I do not understand football at all, I was able to follow it just fine.
The Bleeding Portrait was ho-hum, with a much too long wordy buildup to a sleepy solution. The Hollow Dragon is full of Asian stereotypes, spoken by the other characters, still distasteful.
Also see this review by Bev Hankins on My Reader's Block.
Posted by Rick Mills at 4:17 PM