S. S. Van Dine is a pseudonym of Willard Huntington Wright (1888-1939).
The six Collier spiderweb design books (at right in above photo) sat on my parents' bookshelf for years. My mother was a great book club joiner, so perhaps that's where they came from. The spiderweb design always seemed creepy to me as a kid. In later years I found there were six additional S. S. Van Dine titles, and picked them up one by one until I had all twelve. Apparently Colllier only produced six reprints in the spiderweb design.

This blog will give you a post for each one - characters and synopses. (click to see all) Perhaps you will find them interesting as well!
Title List:
Other resources:
You may find references online to a 13th novel, The Powwow Murder Case. Wright started outlining this story but died before it could be written. A publisher's dummy was made up as a salesman's sample (with the first four pages of the story inside), complete with a cover. Photos of this "13th Philo Vance" appear now and then. These photos were taken from an auction site which sold the item in October 2020. 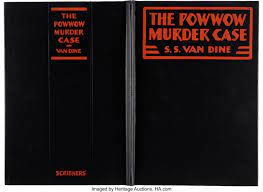 The auction site described it thus:

S. S. Van Dine. The Powwow Murder Case. A Philo Vance Story. New York: Charles Scribner's Sons, 1937. First edition, the only known copy of any printed portion of this unfinished novel. Octavo. viii, 1-4 pages. In the publisher's unusual binding of full black cloth, boards, stamped in red (the spine is so thin, that there is no stamping on the spine), with the usual format of text on the front board, but the rear board is stamped in two vertical lines in blind, with the intended layout for the spine stamped in red between the blind stamping. In the publisher's mock-up dust jacket, which had the intended layout of the front and rear covers as well as the spine (there isn't any text or artwork for the jacket flaps, which are blank).

Here's what we know about the story, taken from the file card image on the dust jacket:

Wright had begun dictating the story in 1937. It was "presumably to involve mysticism and ritual as the cabala is mentioned in the early pages."* He reportedly only finished two or three chapters before lapsing into a period of writer's block.