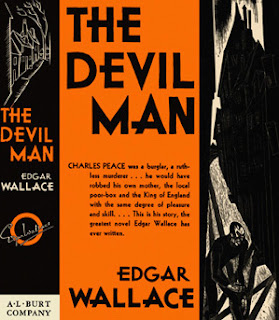 Edgar Wallace
This is available as a free eBook from this page at Project Gutenberg Australia.
Major characters:
Locale: Sheffield, England
Synopsis: Dr. Alan Mainford is called out one snowy night to attend Madame Clarice Stahm. He arrives and her secretary, Peter Baumgarten, brings Mainford to see her. She is in a coma-like trance, but suddenly pops out of it. A strange man, Charles Peace, arrives and plays the violin to her which calms her.* Mainford can do nothing for her, and on his way out her nurse, Jane Garden, begs him to get her away from the house.
Sheffield is a steel center and many companies are rushing to perfect a new kind of steel which does not rust, called 'silver steel' (which we know as stainless steel). The engineer who perfected the process is -- Eckhardt, who is now in the US. He had revealed the formula to Arthur Dyson, along with a small vial containing crystals essential to the process. Madame Stahm has an interest in the Silver Steel Company, and wants the crystals to analyze them for the formula. She had abducted an engineer of the Silver Steel Company, Lamonte, to try to gain the formula but he escapes and dies. She now hires Charles Peace to get it, and his strategy is to start a love affair with Dyson's wife, Kate Dyson, to gain opportunity to steal the crystals. Peace enlists the help of an ex-con, Carton, who happened to be serve with Alan Mainford in the army.
Peace steals the vial of crystals, passes them to his confederate Carton. Carton does not realize their significance and gives them to his old army mate, Dr. Mainford.
* reminiscent of Biblical account when King David played his harp to calm Saul, in 1 Samuel 16:14
Review: This was a great page-turning thriller. Reading some reviews on Goodreads, I found this was based on an actual person - and Wallace's story closely follows the real life story of Peace (1832-1879), as outlined in this Wikipedia article. Here is a photo of the real Charles Peace.