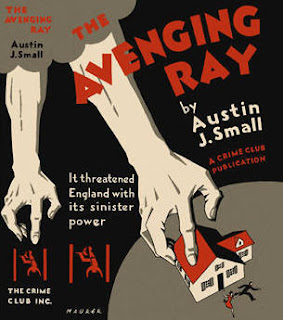 dustjackets.com
About the author: Austin J. Small (1894-1929), UK adventure and thriller author. In the US he published under his own name, while in the UK his books usually appeared as by Seamark. He wrote three novels of science fiction: The Man They Couldn't Arrest (1925) is a mystery novel incorporating unusual devices and inventions into the plot. In Master Vorst / The Death Maker (1926) the London Secret Society's insane plan to kill off the human race by germ warfare is thwarted in the nick of time. The Avenging Ray (1930), as by Seamark, features a Mad Scientist intent upon destroying the world (http://www.sf-encyclopedia.com/)
Major characters:
Locale: The moors of Devon, England
Synopsis: Sir Robert Harrigan invites his friend, Gerry Windermaine, to his home - Deepvale Manor - for a vacation. However, Sir Robert has two hidden agenda - first, to look into mysterious happenings upon the moors; and second, to marry off his daughter Valerie Harrigan, due home from abroad the next day.
Gerry sets out for a walk and finds a yard-wide line across the moors which has been decomposed to dust, and hears of other strange findings of dead animals. He stops by a cottage - Rose Cottage - and meets an enchanting girl outside, Rosaine. Later he sees a tall, mysterious man enter the cottage. The man is Carlo Damian, the Mad Scientist. Sir Robert believes he is reponsible for the happenings, but Gerry is not convinced.
Deepvale Manor has an unexplained electrical surge which pops all the bulbs. Gerry finds a wire on the ground, follows it back to Rose Cottage, and to a dynamo running in a shed - the likely cause of the surge. Gerry destroys the dynamo.
Bob Standy of Scotland Yard arrives. Gerry learns that Damian's hideout is in the Pendine Caves. Gardener Pymm summons Gerry to show him that a lake has disappeared overnight. Gerry encounters Damian at the dried-up lake, and is taken captive to the Pendine Caves.
Review: This is a wild adventure thriller and a lot of fun with the various inventions of the Mad Scientist. The Death Ray which causes all the trouble consists of being a Death Ray comprised of two elements, an Anti-Coherer which dissolves matter, and a Degravitisor, which scatters the residue into the universe.
I wondered why Scotland Yard was called in so early, where was the crime? All that had occurred at that point was mysterious lights on the moor.
The Mad Scientist theme also appears in Leslie Charteris' The Saint books of the same period. And as in the James Bond stories, the villain ties up the hero in his lair, then explains his evil inventions at great length before attempting to do away with the hero. We can't have the hero perish in ignorance!
The book has a puzzling ending. After the Mad Scientist and the Death Ray are dealt with, I was wondering which girl Gerry was going to wind up with - Rosaine or Valerie? The ending is ambiguous. Gerry tells Rosaine to get packed, he is going to take her away, then Valerie shows up twirling a wedding ring on her finger. Apparently Gerry gets them both!
Posted by Rick Mills at 10:15 AM