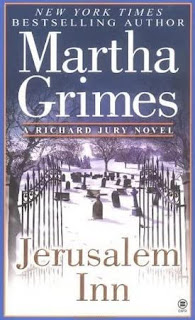 About the author: This is #5 of 25 books featuring Richard Jury. See this Wikipedia article for biography and list of the 25 Richard Jury books. Click this Martha Grimes label to see all my reviews of this series.
Major characters:
Locale:
Synopsis: Richard Jury is en route to his cousin's for the Christmas holidays, more out of a feeling of obligation than desire. He stops in the village of Washington and while wandering around encounters a young woman, Helen Minton, in the churchyard cemetery. She is studying some gravestones and making notes. She feels faint upon standing, and Jury is concerned and offers to escort her home. They have a visit and drinks; and set up a dinner date upon his return.
Jury continues to his cousin's place, and stops in Washington again on the return. He finds the authorities present at Old Hall, a historic site in which Helen was a tour guide. She had been found dead in the upstairs bedroom, a vial of pills at hand.
Review:
Also see this review by Bev Hankins on My Reader's Block.
Posted by Rick Mills at 7:03 PM No comments: 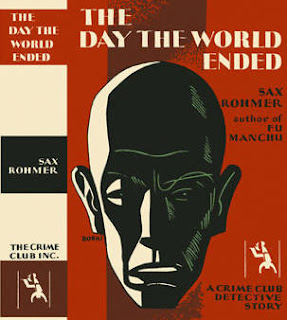 dustjackets.com
About the author: Arthur Henry "Sarsfield" Ward (1883 – 1959), better known as Sax Rohmer, was a prolific English novelist. He is best remembered for his series of novels featuring the master criminal Dr. Fu Manchu. (wikipedia)
Major characters:
Locale: Baden-Baden, Germany
Synopsis: Brian Woodville, correspondent for The Daily World (and our narrator), is in Baden-Baden, Germany to investigate a story of giant bats haunting the local cemetery, and rumors of vampires. He is awaked at 3AM in his hotel by a voice warning him he has three days to leave Baden-Baden.
His first day he makes the acquaintance of:
and initially considers all three of them adversaries. He meets an enchanting young lady, Marusa. He visits the cemetery to find Mme. Yburg has a key, and he sees a giant bat descend on the mausoleum of the Felsenweirs.
The second day he journeys into the Black Forest and finds a spot overlooking the Felsenweir castle, supposedly empty. But he sees guards in armor patrolling the grounds.  He then finds Aldous Kluster is really John Lonergan of the US Secret Service, and M. Paul is really Gaston Max of the Surete. They form an alliance.
They discover the castle is the source of mysterious energy fields, and that these fields had been previously reported disrupting radio communications in New England, coinciding with a visit there by Mme. Yburg.
Their attempts to infiltrate the castle are hindered by the energy fields surrounding it, and they wind up prisoners of Anubis, master of the castle; who has a plan to destroy all life in world (except for him and his followers). Woodville's love interest Marusa is in the castle also, and now she appears to be one of the enemy. Now it is up to Woodville, Lonergan, and Max to thwart Anubis' plan.
Review: I always thought Sax Rohmer, being author of the Fu Manchu books, was an inscrutable oriental himself - and I was astounded to find he is a regular guy named Arthur Ward (bio). But Oh, what fun! This book is more a science fiction adventure/romance than a mystery, featuring the mysterious Black Forest, cemeteries, mausoleums, giant bats, a castle complete with drawbridge and guards in armor.
Some interesting aspects are the foreshadowing of inventions we take for granted today - remember, this is 1929 - remote controls, miniaturized cell-phone like radios, tracking of people by tags (similar to our RFID) worn on the wrist, and aerial (drone-like) surveillance.
One loose end left hanging was the explanation of the failed experiments in Hartford, Connecticut. It is mentioned they failed, and although disrupting radio throughout New England, no explanation is provided nor is it tied into the plot in any way. That story line was simply dropped.
If you really enjoy stories featuring giant flying bats, be sure to seek out The Curse of Doone by Sydney Horler (1930), a Mystery League title.
Posted by Rick Mills at 6:51 PM No comments: