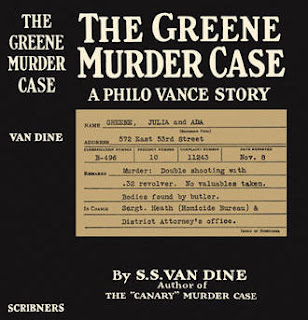 Locale: New York City
Synopsis:
It seems an intruder to the Greene home has shot and killed Julia Greene, and wounded her sister Ada Greene. Their brother, Chester Greene, asks District Attorney John F. X. Markham to investigate personally, as he feels the routine police inquiry is inadequate. Markham invites Philo Vance to come along. The intruder entered and left the home without leaving a trace other than footprints in the snow outside. The question is why the intruder - if bent on burglary - even bothered to go upstairs where the family was sleeping, when the valuables were downstairs?
As soon as the investigation begins, two more murders follow .. Chester Greene and Rex Greene. Now it seems someone is trying to wipe out the Greene family, one by one.
Review:
This is a good diminishing-pool-of-potential-victims novel as the Greenes are eliminated one by one, with no apparent motive. As Van Dine novels go, not overly complex and Philo Vance stays relatively focused without wandering off into abstract monologues on irrelevant matters too often.
Clues are provided throughout as to the murderer. Initially, they misdirect the reader into thinking a certain person must be it - a nice piece of red herring.
A numerical list of clues is provided (there are 98) which is a bit tedious for the summary-before-the-big-reveal.
It is a bit disappointing when things are revealed in the denouément which had not been revealed to the reader previously. It seems the house has a unique architectural feature which is kept a secret from the reader until the end. Also a complicated mechanical device - which I found hard to believe -  is used to give the murderer an alibi.
Extensive footnotes (many in German, no less!) are provided. I had often wondered whether the names/events in the footnotes were real or just made up - and one caught my eye: a reference to the book Murder at Smutty Nose by Edmund Lester Pearson; since Smutty Nose Island and its famous murder are only about 10 miles away from me. A quick lookup found the book and author are, indeed, factual.
Notable quotes:
"This affair is too complicated to be untangled by the unravelling of details."
"The person who sat in that library night after night and read strange books by candlelight is the key to everything."
Philo Vance: "The intruder must have left the room."Sibella Greene: "I suppose he must have, if he's not there now."
Posted by Rick Mills at 7:03 PM