Trouble in Triplicate by Rex Stout (1949) 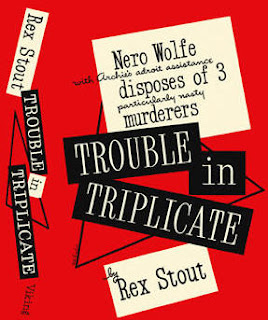 This book consists of three novellas:


Mobster Dazy Perrit hires Nero Wolfe to help him with a blackmailer. Perrit has a daughter at Columbia, Beulah Page, he wants to keep secret for her own protection. He hires a standin, Violet Angelina Sally, to live with him, posing as his daughter. Violet wants to sweeten the deal by blackmailing Perrit. Archie Goodwin suggests a way she can increase her income and give up the blackmail racket.
Help Wanted, Male


Publisher Ben Jensen approached Wolfe for protection - he has received a threat in the mail. Wolfe turns him down - he doesn't do that work - and refers him to another agency. While walking home with -- Doyle, an operative from that agency; they are both gunned down on the sidewalk. Then Wolfe gets an identical threat. What connects them to Wolfe? They had worked prosecuting Captain Peter Root (in prison) for violating military secrecy.
Instead of Evidence


Eugene Poor is convinced his partner, Conroy Blaney, is out to kill him in order to take over their business - manufacturing novelties. He hires Wolfe not to prevent it, but rather to see he doesn't get away with it. Sure enough, within 24 hours Poor is killed by an exploding cigar.

Before I Die is a bit low on believability with mobsters from Central Casting, and it gets a bit confusing with a real daughter and a stand-in. Why didn't Wolfe come up with the simple solution that Archie did?

Help Wanted, Male is the best of the three. Stout is fond of stand-in tricks, and this stand-in for Wolfe is done well and is quite amusing. A murder mystery is tough with such a small cast (no space for red herrings), but this one turns into a standoff between two suspects, and left me guessing until the end.

Instead of Evidence is what you get when a Groucho Marx character (Conroy Blaney) enters the refined Wolfe residence. Wolfe can't wait to get rid of him and neither could I. This is only serious mystery I know of which uses an exploding cigar as a murder weapon! This could be a satire of a Nero Wolfe, but it turns out to be a serious mystery after all.

Posted by Rick Mills at 6:32 PM No comments: