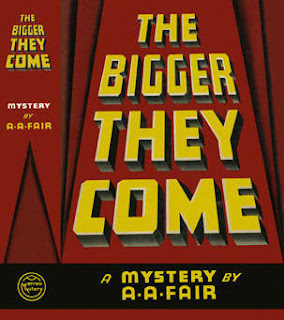 About the author: A. A. Fair is a pseudonym of Erle Stanley Gardner.

Synopsis: In this first Cool & Lam story, pint-size Donald Lam is hired by oversize Bertha Cool as her operative. Alma Hunter hires Cool to find Morgan Birks, on behalf of his wife Sandra Birks, and serve divorce papers on him. Birks has been involved in running a slot-machine racket, and is rumored to have skimmed off some of the profits.

Sandra is driving her brother, B. Lee Thoms, and is involved in a car accident. B. Lee, a.k.a. "Bleatie", suffers a broken nose. He claims he can lead Lam to Morgan. Lam meets with him. Morgan reveals the name of Morgan's girlfriend: Sally Durke. Lam tracks down Sally in hopes of flushing out Morgan.

Lam has several adventures including freqeuent make-out sessions with Alma Hunter, and being kidnapped and roughed up by a gang of thugs, led by "The Chief", William Cunweather, whose unnamed wife is his chief.

Alma has bruises on her neck from an unknown assailant, so Lam provides her a gun for her protection. He teaches her to shoot by having her point the empty gun at him and pull the trigger(!). The assailant returns, and Alma shoots him - in the back.

Lam goes to Arizona and confesses to the shooting himself, setting himself up for an extradition fight and a court appearance. Lam uses his legal training to take advantage of a loophole in the law which may allow a man to murder someone and walk away free.

Review: This story of constant conflict and love interest action shows the genesis of Gardner's career writing for the serialized pulps - a variety of things is always happening in each chapter. The Cool-Lam books are more free-wheeling and fun than the Perry Masons, and Lam's legal background gives him the ability to toss in a court appearance that Gardner always does so well. The legal loophole is interesting, and one wonders whether it existed in reality, and whether Gardner's exposé of it resulted in its being patched up.

Email ThisBlogThis!Share to TwitterShare to FacebookShare to Pinterest
Labels: Fair; A. A., Gardner; Erle Stanley