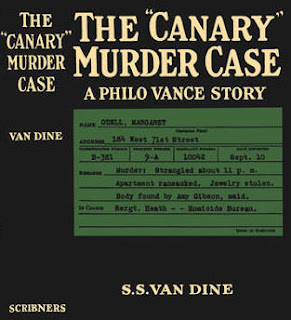 Major characters:
Locale: New York City
Synopsis: Margaret Odell, known as "The Canary", is murdered in her apartment, and found the following morning by her maid Amy Gibson. Witnesses and evidence show no one entered or left the apartment at the time, and it appears the assailant had been hiding in a closet waiting for her to return home from a date. 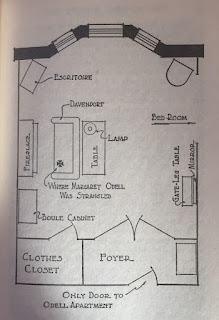 Interior of apartment
It seems like a classic locked-room mystery, although quite obvious someone was hiding in the closet since the keys were found on the inside of the closet door! The only door to the apartment was under constant view by the telephone operator. So how did he get in and out? 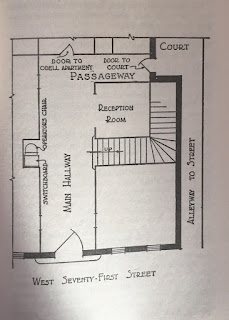 Floor plan of first floor
Skeel is the only one known to be in the apartment at the time. But while narrowing down the possibilities, Skeel himself winds up murdered.
Vance finds the culprit by staging a poker game in which he observes and applies the psychology of poker to the players.
Review: Looks like S. S. had been reading Agatha Christie's The Murder of Roger Ackroyd (which came out the year prior, 1926) before writing up the solution to this one! If you have read T.M.O.R.A .then you already know the solution that got everyone so upset when Christie used it. Other than the copycat ending, a nice solid book in the series, before Philo Vance became so pedantic.
Vance just issues snide comments through most of the book, but nothing much happens to solve this locked-room puzzle until they get four suspects lined up:
Vance's poker-game investigation is interesting - you may have to skim the play-by-play of the various hands, but even if you do not know poker you can follow Vance's logic following the game to pin the killer.
This book doesn't have any long side-trips through Vance's various eruditions (good!) but it does have a plethora of irrelevant footnotes (zzzz). I did enjoy the nicely drawn sketch maps of the crime scene.
Posted by Rick Mills at 1:04 PM