The Adventures of Ellery Queen (1934) 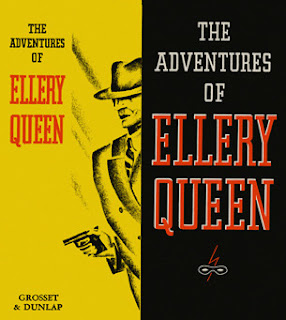 dustjackets.com
This is a collection of 11 short stories:
Review:
This collection of short stories is not too satisfying. The mysteries are so-so, generally needing a long stretch of imagination and complicated explanations as in all the early Queens. However, the stories are overshadowed by a lot of the baggage of the 1930's writing styles :
Female gender stereotypes abound, especially in The African Traveler. The young woman student is patronized by Queen. It also irks me that women tend to be treated differently - why is it that a woman enters a scene, the writer provides a head-to-foot description of her clothing and accessories, but when a man enters a scene, nothing?
Pejorative racial terms are used for Black and mixed-race persons in Three Lame Men and The Teakwood Case. Granted, the n-word does not appear, but several others of their ilk do. Not only that, the appearance of a Black woman is only as a menial chambermaid in each.
Intentional harm to pets appears in Two Headed Dog and Seven Black Cats. Distasteful in the extreme. In a murder mystery, the murder victim usually deserves it, but innocent animals never do.
The best stories - by process of elimination - are The Hanging Acrobat, The One-Penny Black, and The Mad Tea Party. After subtracting the stories noted above, and two in which the dying victim spends his last precious moments constructing confounding dying messages (Bearded Lady and Glass-Domed Clock), they are pretty much the only ones remaining.
There is a sequel about ten years later: The New Adventures of Ellery Queen.
Posted by Rick Mills at 12:56 PM