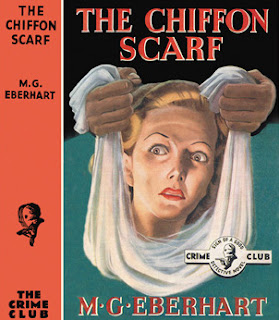 dustjackets.com
About the author: (from Goodreads): Mignon Good (1899-1996) was born in Lincoln, Nebraska. In 1929 her first crime novel was published featuring 'Sarah Keate', a nurse and 'Lance O'Leary', a police detective. This couple appeared in another four novels. Over the next forty years she wrote a novel nearly every year. In 1971 she won the Grand Master award from the Mystery Writers of America.
Major characters:
Locale: New York City, St. Louis, Colorado
Synopsis: New Yorker Eden Shore has been invited by old friend Averill Blaine to her wedding. They have not seen each other in years. They were friends, but became rivals for the affections of Noel Carreaux, and Eden had stolen him away from Averill. Noel had then proposed to Eden, but she turned him down (after all that!) Now, faced with the prospect of seeing him again, Eden has reconsidered and hopes to rekindle their romance by teasing Noel into proposing (again). Relations between Eden and Averill are still touchy - and Averill's motive in inviting Eden is really just to show off her fiancée, Jim Cady.
Averill invites Eden to fly to St. Louis, then the entire wedding party will take a chartered plane to Lousiana for the ceremony.
Jim works for the Blaines and is the developer of a new aircraft engine. War seems on the horizon (this is 1939) and an agent of a foreign government, Major Pace, is here to purchase rights to the engine after observing a test flight.
Eden finds herself alone with Jim Cady, and they realize it is love at first sight.
The test flight gets underway, the plane piloted by Averill's uncle Bill Blaine, accompanied by mechanic Mike Strevsky. The plane catches fire and crashes, killing both men, leaving a widow of Bill's wife, Creda Blaine.
Despite the tragedy, the plan is for the wedding to go on as scheduled. Averill feels pressured, as she sees Jim slipping away to Eden already.
The wedding party departs for Lousiana on the chartered plane, piloted by Lud Strevsky and Jim. It gets diverted, and lands on the desert in remote southern Colorado; with everyone wondering where they are. They take shelter in a dude ranch owned by P. H. Sloane. Eden and Averill share a cabin. Eden finds Creda murdered in her cabin, while wearing Averill's coat, with Eden's chiffon scarf tied around her neck. It appears Eden wanted to do away with Averill to stop her wedding - so she could have Jim all to herself - and mistook Creda for Averill.
Review:
Mignon Eberhart does the woman-in-love-wrongly-accused so well. You just know there is going to be a girl-next-door and a trashy vixen in the story. The first part of the book - up until Sloane's Ranch - is more a romance than a mystery. But that's OK.
Midway (at Sloane's ranch) it turns into the typical closed group marooned in isolation murder case. The desert/ranch setting is done well, and reminds me of Erle Stanley Gardner's stories set in the desert.
The location of Sloane's ranch was a puzzle - it was not clearly stated. I consulted my atlas and the references in the text indicate it is southernmost Colorado, near the New Mexico border.
The other puzzle was: how does a flight from St. Louis to Louisiana wind up in Colorado with no one the wiser? (Try that today!) It was diverted intentionally, but the overnight flight sure took a long time to get there!
One thing that surprised me: Usually I can pick out the victim in advance, not but necessarily the murderer. This time around I was able to pick out the murderer right away (before the deed even happened) but I was sure wrong on the victim!
This would be an especially good read if you are staying in an isolated desert cabin.
Posted by Rick Mills at 6:33 PM