The Basle Express by Manning Coles (1956) 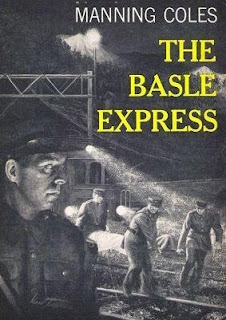 At Bertram's Hotel by Agatha Christie (1965) 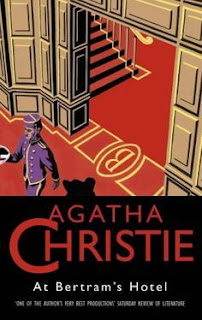 Bertram's Hotel staff:
and:
Locale: London and environs
Synopsis: Jane Marple takes a two-week vacation at Bertram's Hotel, known for its traditional Edwardian atmosphere. She encounters some guests: adventuress Bess Sedgewick, her daughter Elvira Blake, and forgetful cleric Canon Pennyfather.
Almost immediately Miss Marple has a feeling that everything is not as it appears; as if she is in a theatrical set with actors playing the guests.
Elvira Blake will inherit a fortune when she turns 21. Her estranged mother is surprised to find her at the same hotel and urges Elvira's guardian, Col. Derek Luscombe, to take her elsewhere. Meanwhile, cleric Canon Pennyfather leaves for a conference, gets confused, and disappears. A few days later, he wakens in a private home near where a train robbery has recently occurred.
Elvira has been seen with a young race car driver, Ladislaus Malinowski, whose car has been seen at several recent robberies. She questions her lawyer about her inheritance: how much it is, and who would get it if she were to die. On Miss Marple's last day at the hotel, while talking with C.I. Davy, gunshots are heard on the street. Davy rushes out to find a hysterical Elvira next to the body of commissionaire (doorman) Micky Gorman. Elvira explains Gorman died shielding her from the gunfire.
Miss Marple and C.I. Davy reconstruct the disappearance of Canon Pennyfather to reveal a fact that helps unravel the mystery and identify the killer.
Review: At first I thought this was going to be one of the sad reminiscences about alas, things are not how they used to be, but that quickly passed as the story begins. The action does take a while, however, the murder not occurring until Chapter 20. There are a number of parallel mysteries occuring, and they all get tied together at the end.
There are some loose ends. I was looking for an explanation of how the train robbery was accomplished, but no. At the end when the killer is identified, it is ambigous what is going to happen to that person.
Overall, this was an excellent fast-paced read and the entire environment of the hotel quite enjoyable.
Also see this review by Bev Hankins on My Reader's Block.
Posted by Rick Mills at 5:14 PM No comments:

Shadow in the House by Sinclair Gluck (1929) 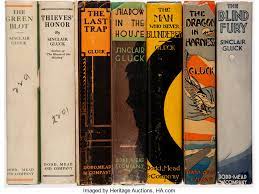 About the author: Sinclair Gluck (1887-1956) was born Jasper Sinclair Gluck in Buffalo, New York. Gluck was a prolific writer for the pulps, with works by him appearing in, for example, Argosy, Detective Fiction Weekly, even Black Mask. At least half of his published novels, including The Man Who Never Blundered, were originally serialized in pulps. (Goodreads)

The Harrisons and guests:
and:

Synopsis: Newlywed Landis -- is a rookie detective. He is called out to a murder scene at the Harrison mansion, and brings his new father-in-law, Paul Bernard, an experienced detective, along.

At the Harrisons, they find millionaire Mason Rees Harrison dead from an arrow shot in the back. Archery is the family's passion, with a practice range on the third floor. All famly members know how to shoot arrows, which are made by Mason's brother Joel Harrison in his workshop. Joel is a quiet, introverted, dreamy sort (autistic?) who enjoys being alone, working on the arrows and stamp collection.

Housekeeper Miss Mount gives Landis and Bernard a tour of the mansion and fills them in on all family matters. Butler Stimson is always at hand and is called upon for assistance often. The family and house guests are all questioned, while the body of Harrison remains on the floor. Later on, attorney Ray Graham - also a house guest - is shot with an arrow in the same manner, while standing in the same spot, but only incurs a minor arm injury. Graham's wife, Ethel, becomes a focus of the investigators when a strange old farmer, Hiram Cuddy, appears looking for her, and her past history becomes suspect.

The entire middle section of the book consists of the rather tedious questioning of the family and house guests. While repetitive and plodding, I realized that this is the essence of an investigation - gather the witnesses and ask the same questions, over and over and over. In that aspect, it is a realistic account, and in the format we today call a police procedural.

The detectives (and the reader) gradually learn clues which slowly unravel the mystery.

Paul Bernard and Landis form the typical good cop (Landis) / bad cop (Bernard) pair. Bernard is abrupt and domineering, Landis quiet and respectful. They put those qualities to good use.

I was wondering where brother Joel Harrison was. He is discussed throughout but does not actually appear until halfway through the book.

The butler Stimson is a very enjoyable character. It is fun to watch him switch between his submissive servant side and his human side. Susan Duckworth, housemaid #1, is also enjoyable as she is a flirty little thing who has some fun with the handsome detective Landis.

It was surprising to me that the body of Harrison was allowed to remain on the floor all during the day and evening of questioning, and even overnight - noting the coroner would return in the morning the collect it. It seemed a bit gruesome and unrealistic.

Several solutions were proposed and discarded before the truth is revealed. Overall, a solid, long, repetitive investigation and a good read by a hard-to-find author.

Posted by Rick Mills at 4:35 PM No comments: 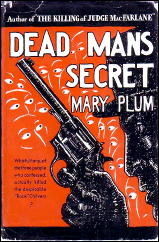 mysteryfile.com
About the author: All I could find is this Goodreads list and this bibliography on classiccrimefiction.com.
Major characters:
Locale: "one hour north of Chicago, on Lake Michigan" which puts it in Wisconsin.
Synopsis: Consulting detective John Smith is travelling back to Chicago and decides to stop in to see his old friend Gray Manners. Manners is in the midst of hosting a house party, and reluctantly invites Smith in. Smith observes the "party" is not going well, everyone seems glum and on edge. Most are wondering why Rook Chilvers, a notorious ex-con, is present.
It is revealed that actress Mary Angell has had her pearls and diamonds stolen from her bedroom during the night, but this does not seem to concern anyone. The guests retire upstairs for the night. John hears a gunshot, and runs upstairs to find Chilvers mortally wounded in his bedroom. A doctor is called. Before Chilvers passes away, he mentions a letter, and points to Mary Angell and says "You!". It turns out Chilvers had a row earlier and struck Ernst Putnam, who then left the house. Then the gun which had been seen near the body disappears. A maid reveals Chilvers had received a letter in the mail that morning, which apparently had been burned as ashes were found in Chilver's wastebasket.
Smith works with District Attorney George Hewer to interview the guests and find the murderer. Tracing the (burned) registered letter leads them to a source who unravels everything. There is no shortage of suspects: three of the guests confess to being the killer!
Review: This is John Smith's second appearance (the first was in The Killing of Judge Mac Farlane). Once we get past the too-convenient setup of the detective just happening to drop in minutes before a murder, the story goes pretty well. We have a nice detailed drawing of the layout. What a house! And what is in that huge basketball-court space in the middle? (I would expect it to be open to the first floor with a gallery hallway all around). 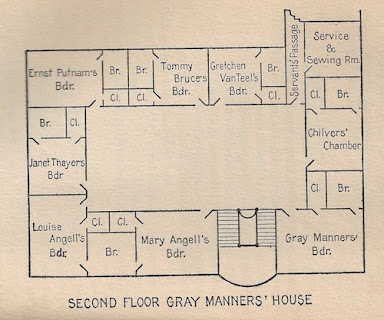 And the crime scene: 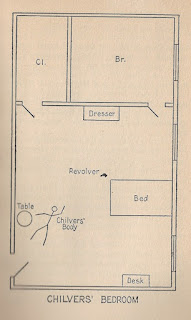 Smith has to work hard to pull information from the reluctant guests. When the motive is finally revealed (it will not spoil the story to mention it has to do with some documents held by Chilvers), it is a clever surprise to the reader. The documents reveal relationships between some of the guests in a unique way, the way it all resolves is quite unexpected and satisfying.
The story has some drawbacks. First, the arrival of Smith is hyped by the author who brags about him quite a bit unnecessarily. There are several hints (but not explicity stated) - that the victim Chilvers is Black. The revelation of the murderer is a letdown and the reader feels cheated a bit. And a big loose end is left dangling: the victim was shot from behind, and much was made of the fact the revolver was found far in front of the victim (see drawing); instead of behind him where a murderer would likely drop it on his way out. However, the book ends without explaining the significance.

Overall, this is a nice, tight period mystery with a solid cast of characters; and I hope to find some more titles in this John Smith series:
Posted by Rick Mills at 6:42 PM No comments: