Call for the Saint by Leslie Charteris (1948) 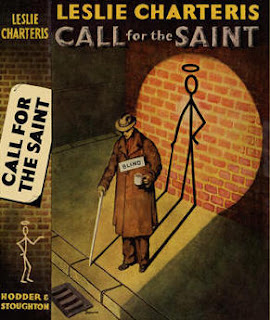 This title consists of two stories, The King of the Beggars and The Masked Angel.
The King of the Beggars
Major characters:
Monica Varing, actress
Junior, a thug
Fingers Shultz, a thug
Sammy de Leg, old pal of Hoppy's
Frankie Weiss, the in-between
The King of the Beggars
Mrs. Laura Wingate, a society dame
Stephen Elliott, philanthropist
Detective Lieutenant Alvin Kearney
Simon Templar
Hoppy Uniatz
Locale: Chicago
Synopsis: The Saint stumbles upon a protection racket being worked in Chicago. The King of the Beggars extorts protection money from street beggars. The Saint and actress Monica Varing team up, in disguise, to infiltrate the organization and unmask the King. No middle class here, we alternate between the alleys and high society parties. Good account of the dirty Chicago of the 1930's.
The Masked Angel
Major characters:
Dr. Spangler
Torpedo Smith, a prizefighter
Barrelhouse Bilinski, a.k.a The Masked Angel, a prizefighter
Michael Grady, manager of the Manhattan Arena
Connie Grady, his daughter
Steve Nelson, Connie's finace
Whitey Mullins, old pal of Hoppy Uniatz, works at the Arena
Karl, a thug
Simon Templar
Hoppy Uniatz
Inspector John Henry Fernack
Locale: New York City
Synopsis: The Saint attends a fight in which The Masked Angel knocks out Torpedo Smith, for good - he is dead, but the actual cause is not known. The Angel wins every fight, even those he was not favored. The Saint is suspicious that Dr. Spangler has done something to give the Angel an unfair advantage. The Saint takes away the Angel's gloves for examination. The Masked Angel is to fight Steve Nelson next for the championship, but Steve meets his end, and The Saint substitutes for him in the ring.
Review: Unlike many adventures based on sports, even those who do not follow prizefighting can follow the action in this account. The Saint is in good form as he chases down the mystery of what happened to Torpedo Smith. Much attention is given to following the trail of a handgun - which had not been used, so why bother? And we always look forward to Patricia Holm, but she makes only a cameo appearance.
Posted by Rick Mills at 6:37 PM