The Mirror Crack'd by Agatha Christie (1962) 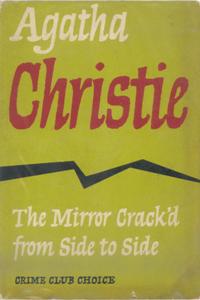 image: wikipedia
Major characters:
Locale: Village of St. Mary Mead, England
Synopsis: Miss Jane Marple is dealing with her inevitable aging, and is no longer as mobile as she wishes. Her doctor has required her to have a live-in companion, Miss Knight, who is a bit too overbearing.
Dolly Bantry is now living in a small cottage, having given up the her mansion. The manse, Gossington, is now owned by a film star, Marion Gregg, and her husband, Jason Rudd. Seeking to fit in to their new community, they host a benefit for the local ambulance. Dolly is excited to see the improvements to her former home. In the receiving line is local Heather Badcock. When Marion greets Heather, there is a stumble and upset and Heather's drink is spilled. Marion replaces the drink with her own freshly-poured one. Heather drinks, and immediately falls poisoned.
The immediate question is - for whom was the poison intended? Marion or Heather? It is quickly assumed to be Marion, as she had been receiving anonymous death threats. Who wants her out of the way? Could it be one of her four - yes, four - former husbands? One of her three discarded adopted children? Another actress who is the understudy for Marion's current film role?
The most significant clue is the sudden inexplicable "frozen" look on Marion's face while Heather is gushing her story .. as Marion looks past Heather at several unexpected guests on the stairs, and a painting of Madonna and child.
Review: This is a fine Miss Marple story. In the beginning when she is musing about change in the neighborhood, nothing being the same, and the inevitable aging process (along with Agatha herself, who was age 72 at this writing) it is somewhat sad especially when the reader is in the same age group. It is gratifying that she overcomes this and proceeds to ferret out a murderer.
Several abrupt twists at the end, as people have surprising past connections to Marion.
A couple of fine red herrings are pulled across our path: it seems the history of Gossington includes the discovery of a murdered woman in the library by Dolly Bantry; and a dark-eyed ingenue, Mary Bain, who has her eyes on Arthur Badcock and may be glad Heather is out of the way.
I have two questions for you, loyal blog reader. Please answer with a comment if you know:
Please also see this review by Bev Hankins on My Reader's Block.
Posted by Rick Mills at 1:00 PM