The Saint in Miami by Leslie Charteris (1940) 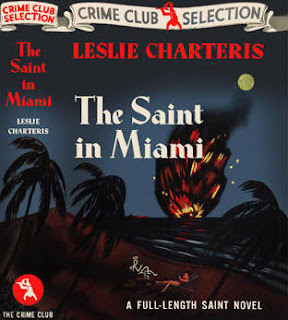 dustjackets.com
Major characters:
Synopsis: Simon Templar, Patricia Holm, Peter Quentin, and Hoppy Uniatz comes to pre-WWII-era Miami to visit Lawrence and Justine Gilbeck, but upon arrival, finds them missing. He also sees a ship explode, finds a dead body, and has a brief sighting of a submarine. He also notes a yacht departing the scene.
He borrows the Gilbeck's speedboat and catches up to the Randolph March's yacht, the March Hare and boards. He meets March, Captain Friede, and a sexy redhead, Karen Leith.
Later Karen Leith meets up with Simon. Someone takes a shot at them - and misses. Simon finds out the shooter is Lafe Jennet. Looking for the shooter leads Simon to an old gambling houseboat run by a Greek named Gallipolis.
Jennet says he was working for Jesse Rogers. Simon finds Rogers is a performer at a night club, The Palmleaf Fan. This is a German-style cabaret with dinner, dancing, and specializes in male performers dressed as women, and vice-versa.
Simon's investigation is cut short when Peter and Patricia are kidnapped, and the search takes him deep into the Everglades with Indian guide Charlie Harwick.
Review:
This is set in 1940 Miami, while WWII is ramping up in Europe but the US is still neutral. Suspicions of Germany are seen throughout.
This is the 26th Saint novel, and Charteris is in his stride here. Sherriff Newton Haskins is a suprise - on the surface he seems the sleepy Southern sheriff, but he is a worthy adversary/partner for the Saint, even better than Claude Eustace Teal. The role of Karen Leith adds a new element to the story and tension between her and Patricia Holm.
The plod through the Everglades is a bit long but perhaps that is intentional, to portray the vast expanse and isolation of the area, which it does well.
Generally, when the Saint leaves England, the adventures become a bit awkward but this one excels.
Posted by Rick Mills at 6:32 PM