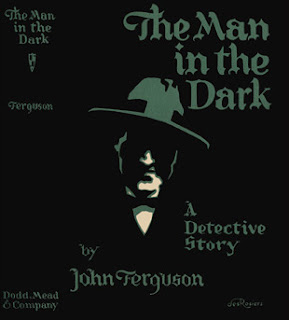 dustjackets.com
About the author: John Alexander Ferguson (1871-1952) was a Scottish railway clerk, clergyman, playwright, and mystery writer. See this article at gadetection for details and a bibliography.
Major characters:
Locale: London and environs
Synopsis: Sandy Kinloch is down and out in England after coming back injured from the war. Destitute, he decides to visit his prosperous war buddy, Dr. Peter Dunn, in search of a loan - or a handout. With difficulty, he finds his way to Dr. Dunn's in the fog. The meeting doesn't go well, they argue, and Kinloch leaves with having asked for help.
He bumps into a man in the street - The Man in the Fur Collar. After a brief conversation, Fur Collar makes him an offer. He needs a witness to a conversation, and will pay Kinloch £5 to sit and listen to a conversation he will have with another man, to demonstrate to the other man that he is not alone in the house. Kinloch agrees. He sits in the designated spot behind a screen. A caller arrives and the conversation gets under way. Kinloch rattles papers and coughs on cue to show that Fur Collar is not alone.
Fur collar and his caller argue, then fight. Kinloch rises to assist, but is knocked out. He awakes in a car driven by a woman who identifies herself only as Stella; and finds out that Fur Collar is dead. She takes him to a faraway house and cares for his wounds. Kinloch tries to learn where he is by listening to the conversations between Stella and her housecleaner Betsy Spedding.
It is quickly determined that Fur Collar is Ponsonby Paget, publisher of a scandal sheet. The sheet makes some money from direct sales, but mostly from payoffs by persons trying to suppress gossip about themselves.
Godfrey Chance, journalist for The Record, is assigned to cover the story. The paper also employs private enquiry agent (detective) Francis McNab; and the two work as a team.
Inspector Snargrove of Scotland Yard is the official investigator, and proposes his own ludicrous detailed theory of events by his erroneous interpretation of all the evidence.
The story becomes a chase thriller, with Chance and McNab after Kinloch, Kinloch trying to find Stella, and Stella hiding the killer.
Review: Oh, this was an excellent read, and a unique thriller in many aspects.
The book has four parts. The first, the murder, is told in third person. The second, by journalist Godfrey Chance. The third, by Dr. Peter Dunn. The fourth, again by Godfrey Chance.
I was surprised to find Kinloch has a certain "attribute" (which I won't reveal) but which is gradually revealed to the reader's surprise. Once known, I realized all the clues I had missed. This was very cleverly constructed.
Hard to find other books by this author but I will set up Biblio searches for them! Caution: several authors with this name. This one is (1871-1952) but some sources say (1873-1952).
See also this review on A Penguin A Week (spoiler - reveals the attribute noted above).
Posted by Rick Mills at 10:57 AM