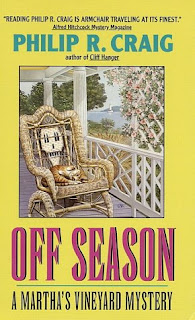 About the author: Philip R. Craig (1933 –2007) was a writer known for his Martha's Vineyard mysteries. He was born in Santa Monica and raised on a cattle ranch near Durango, Colorado. In 1951 he attended Boston University intending to become a minister, and got a degree in 1957. He taught English and Journalism at Endicott College in Beverly, Massachusetts from 1962 to 1965, and at Wheelock College in Boston until 1999, at which point he retired to become a full-time writer. (Wikipedia)
Major characters:
Locale: Martha's Vineyard, Massachusetts
Synopsis: The island conservation group is purchasing a 50 acre parcel from Carl Norton, and holding a hearing to determine best use. This leads to conflict between animal rights people (led by Mimi Bettencourt) and hunting rights people (led by Nash Cortez).
J. W. Jackson is visiting Nash, when a stranger arrives. It is Joey Percell, ex-cop and now rumored to be with the Providence mob. Percell and Nash argue, Percell assaults him, and J.W. holds him until the police arrive.
Chug Lovell, a local back-to-nature type and archery enthusiast, is hanging out with attorney Heather Manwaring, but the word around town is that he is going to dump her for Helene Norton, daughter of Carl Norton. He also seems to have no obvious source of income. Then he is found dead, with one of his own arrows in him. Investigation shows lots of people had motives to do away with him.
Review: Reading the cover blurb, I thought oh, no, not a book of town political squabbles. While part of the story, they do not overwhelm the story line and it is nice to settle down with easy-going J.W. and Zee. I enjoy their repartée and even steal a few of their lines to use on my wife!
The story line is good and believable. I finished this one in two sittings (or, more precisely, two lyings - as in lying in bed). This one tells the story of how J.W. acquired his two cats - no, wait - how two cats acquired J.W. -  in an amusing episode which really involves four cats.
Posted by Rick Mills at 11:04 AM