The Man in Lower Ten by Mary Roberts Rinehart (1909) 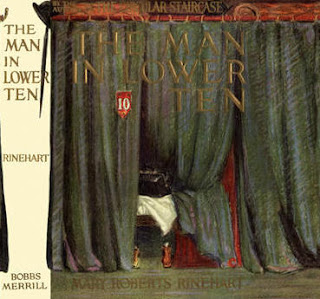 dustjackets.com
About the author: Mary Roberts Rinehart (1876 – 1958) was an American writer, often called the American Agatha Christie, although her first mystery novel was published 14 years before Christie's first novel in 1920. Rinehart is considered to have invented the "Had-I-But-Known" school of mystery writing, with the publication of The Circular Staircase (1908). (from a Wikipedia article).
Major characters:
Locale: various location along the railway between Washington and Pittsburg
Synopsis: Lawrence Blakeley, attorney (and our narrator) is a partner in the law firm of Blakely & McKnight. He is en route to Pittsburgh to present evidence (forged documents) in a case against Bronson.
Blakely books a sleeping berth on the Washington Flier. At the request of a tall woman in the station, he books an additional berth - getting Lower #10 and Lower #11. He gives her the ticket for #11. That night, he finds Lower 10 already occupied. He and the porter are unable to rouse the sleeper - Simon Harrington - and the porter puts him in Lower 9, apparantly the sleeper's berth.
In the morning, he finds his clothes, and possessions - including the forged documents - gone, and other clothing in its place. Then he finds Harrington, in Lower 10, has been murdered in the night. It appears someone was after the documents and killed the wrong man - Blakeley being the intended target. It further appears the murderer swapped the berth signs around between 7 and 9, which caused Blakely to wind up in 7, thinking he was in 9. Making matters worse, the stiletto murder weapon is found under Blakeley's pillow in 7 - supposedly occupied by Henry Pinckney Sullivan - who is nowhere to be found.
The conductor is summoned, and in the midst of dealing with the body along with self-proclaimed amateur detective Wilson Budd Hotchkiss, the train is hit from behind by the following section, wrecked, and afire. Blakely, Hotchkiss, and two women - the tall woman and alluring Alison West - seem to be the only survivors from that car.
Blakeley is assumed to be the killer and is followed by a police detective (Johnson). Blakely teams up with amateur detective Hotchkiss to track down the real killer, all the time falling in love with Alison West.
Review: I do enjoy railway mysteries, but they don't usually involve a train wreck messing up the works just when the first mystery is being sorted out, so that was a new twist! Blakeley is a good protagonist, and his alliance and flight with the amateur detective Hotchkiss reminds me of The Thirty-Nine Steps  -  (which I read carefully, but could never quite figure out where the 39 steps were*).
Blakeley is gradually convinced that he must be the murderer (although the reader knows that is not so), even getting up the courage to eventually turn himself in to authorities. He has a friendly relationship with detective Johnson who is assigned to shadow him, even telling him where he is going, and taking him along as well.
Hotchkiss is the amateur detective, and I always suspect the amateur who shows up may be more than he seems. The authorities seem to be OK with him carrying around the murder weapon (so much for chain of evidence).
There are a lot of people involved in this story. I did get confused on matching up the various nicknames (tall woman, copper-haired woman, etc.) with their real names (my partial list above may be not accurate) and family relationships. Some I could not untangle at all, they made my head spin, such as:

"Incidentally, he said that Alison was his wife's cousin, their respective grandmothers having, at proper intervals, married the same man..."

leaving me with the impression that everyone on the train was related to everyone else.

* Wikipedia says:  John Buchan wrote The Thirty-Nine Steps while he was ill in bed with a duodenal ulcer, the name of the book originated when the author's daughter was counting the stairs at St Cuby, a private nursing home on Cliff Promenade in Broadstairs, where he was convalescing.
Posted by Rick Mills at 1:05 PM