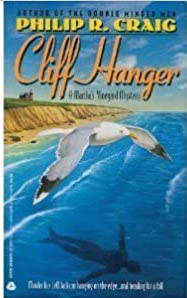 This is Martha's Vineyard #4.

Major characters:
Locale: Martha's Vineyard, Massachusetts; and Colorado
Synopsis: J. W. Jackson's girlfriend, Zeolinda "Zee" Madieras, is off to New Hampshire for a month long conference, so J. W. is on his own on Martha's Vineyard. First, Geraldine Miles, niece of local Dan "Iowa" Wiggins, is staying on the island to escape her abusive boyfriend, Lloyd Cramer of Iowa. Lloyd hunts her down, asks for forgiveness, and not receiving any, beats her up.
J. W. briefly meets Bernadette Orwell, a former student of professor John Skye, while she is on the island with a class. Soon after she returns to the mainland, she dies from a drug overdose. Her journal hinted at an affair with John Skye, which causes her brother, Gordon Berkeley Orwell, to seek out John Skye for revenge. However, not knowing Skye is really at the family ranch in Colorado, he mistakes caretaker J.W. for Skye, and attempts to kill him several times. J. W. heads to Colorado to warn Skye that Orwell is after him. During his visit to Colorado, he becomes enamored with Skye's (sister? cousin?) Billy Jo Skye. Orwell arrives and plays cat-and-mouse with J.W. and the Skyes.
Review: This is the best Craig mystery I have read thus far. I was not too excited initially reading the book blurb, as it puts J.W. way out of his element in Colorado. Usually when the series protagonist is off somewhere else, the story line suffers; but not here.  J.W. is faced with two badly-obsessive guys: Lloyd Cramer and Gordon Berkeley Orwell. Either one alone would have made a good adventure, but we get two at once. The cat-and-mouse chase between Orwell and J.W. is well done, and depicts Orwell as a dangerous man to have after you. The tension is great.
Posted by Rick Mills at 1:25 PM