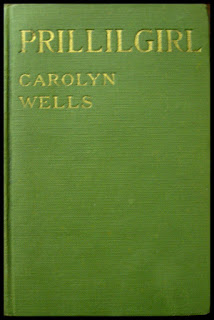 photo: Robert Erwin books
About the author: Carolyn Wells (1862-1942) was married to Hadwin Houghton, the heir of the Houghton-Mifflin publishing empire. Like Mary Roberts Rinehart, being in a publishing family created an easy pipeline for getting her works into print. She wrote a total of more than 170 books. See this Wikipedia article.
Major characters:
Locale: New York City
Synopsis: Guy Thorndike is an accomplished, wealthy actor, looking for his next big dramatic role. One day, Corinne Deane (Prillilgirl), a naive young woman of 19, appears at his home. He thinks she is just a fan looking for a photo, but she appeals to him to marry her. She explains how a marriage of convenience would benefit them both. Guy considers her proposal and accepts, and they are quickly married. Housekeeper Lora Lamb assumes the mother role for them both.
Mallory Vane has written a play and is looking for a buyer. Guy Thorndike had suggested a role in the play, with an eye to playing it himself. Dan Larkin is also interested in the play, and would cast his favorite Jeffreys and Agatha Barr. Agatha appeals to Prillilgirl to get Guy to give in on the play, but Prillilgirl proves perfectly capable of sticking up for herself and Guy.
Mallory Vane invites Prillilgirl to his place and begins to make advances to her; now two men - he and Larkin - have their eyes on Prillilgirl. Artist Pete Jessup (Mallory's roommate) arrives and saves her from their clutches. Vane invites her back - under false pretenses - and while she is present and hiding, Vane is stabbed with his ornamental dagger which he has adapted into a pen.
Review: Well, this was a surprise! I was expecting the usual country-house stuffy crusty characters, but Guy and Prillilgirl are quite the change. He is a dual personality, a shy introvert in real life, a dramatic actor on the stage. She is a young naive farm girl, unaware that ladies must not go to carabets or other men's apartments alone; yet she knows how to stick up for herself in the face of nasty antagonists like Agatha Barr and lechers like Mallory Vane.
The book follows the usual Wells format - the local invcstigator (McGee) does all the legwork and gathers up the clues, then Fleming Stone pops in at the end for his "and-now-the-envelope-please" moment. This time, however, McGee is a pretty productive detective instead of the usual bumbler.
I did get a chuckle that following their civil ceremony, she asks Guy for a kiss to consummate their marriage! It is not recorded whether he gave in. After all, this *was* 1924!
The ending has a couple of curious twists which I did not see coming - although Twist #1 laid the groundwork for Twist #2.
Posted by Rick Mills at 12:13 PM