Surprising little is known about Kathleen Moore Knight (1890-1984), at least online. She is not listed in Wikipedia nor the more popular mystery fiction directories; her booklist is on Fantastic Fiction. My count is 34 mystery novels, all published by the Crime Club; a few under the pseudonym of Alan Amos.

I recently discovered a copy of an archived 1946 newspaper interview (at this link) which includes not only her background, but also the only photograph I have ever seen of her (her dust jackets apparently never included a photo). Note her pins spell out "K M K". The text in the archived scan is difficult to read, so I have typed it out for you below, and included the photo. 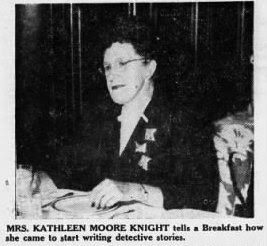 BETWEEN MURDER MYSTERIES, and en route from Mexico to Martha’s Vineyard, Kathleen Moore Knight stopped off in Boston one morning last week long enough to have breakfast at the Copley Plaza and reveal that her next Crime Club book would be conceived July 10.

“I believe it will be my 20th” - she paused to screw a cigarette into a holder - “or perhaps my 21st. People always ask me how many books I have written and I never seem able to give them the latest correct figure.”

If appearance means anything, then Miss Knight* ought to remember, looking, as she does, very much like an efficient and statistically-minded business woman. She was one, too - a YWCA executive secretary. That rigidity of a social worker vanishes, however, once she appraises a humorless situation; it is then that she relaxes completely and her teeth flash strong and white with frequent outbursts of laughter.

“There was nothing very funny about the weekly train ride I used to take to Boston,” Miss Knight said with a smile. “From the time I was 12 years old until I was graduated from high school I was dismissed at noon every Friday in order to hear the Boston Symphony play. Of course, quite a few classmates envied my excursions - if they only knew that I HAD to go.”

The daughter of George Knight, wealthy Brockton shoe machinery inventor, Miss Knight turned down college for Lasell Seminary, and after a fling at public relations (“those days are best forgotten”) I went to work promoting funds in New York for intrepid explorers, aviators, and adventurers who made headlines (“we won’t name names”) after Lindbergh’s solo hop across the Atlantic. With the crash and ’29 depression, she fled to Martha’s Vineyard and there, actually from sheer boredom and want of something better to do, wrote her first murder mystery.

“One day I happened to be looking out of the window and wondering what it would be like if the island homes around me housed murderers; in my own imagination I scattered the landscape with corpses and before I knew it, a detective story was born,” Miss Knight recalled. “That was in March - six months later the book was completed and with one revision, accepted as a Crime Club selection by Doubleday Doran. They’ve published everything I’ve written ever since.”

Miss Knight attributes her success - critics for years now have been raving about her deftly constructed, cleverly carpentered murder mysteries - to the fact that she has inherited some of her father’s inventive genius. “He designs new machinery. I try to devise fresh plots,” she said.

Although she never was a crime story fan, and had only the average reader’s en passant page-turning acquaintance with Sherlock Holmes and his ilk, Miss Knight is a severe critic of detective fiction - including her own. Here’s what she thinks about a best-selling author of whom she is a best-selling contemporary:

“His first six books were good, but after you’ve read the same story in six different volumes, that same story becomes rather tiresome in the next six books.”

She also has no use for the old - and now unreliable - “whodunits” of the locked door, “had-I-but-known,” secret room, and “the-butler-did-it” schools of sleuthing.

“I avoid those hackneyed threadbare situations along with the death-by-unusual-secret-weapon sort of thing because smart editors just won’t stand for them,” she added. “And I have long since learned that it takes more than a puzzle, the pieces of which must be fitted together by the reader, before a detective story writer can boast that he is having a wonderful crime.”

Of course she has had some wonderful crimes, and sales, too. The Kathleen Moore Knight output has not only sold big in original Crime Club editions, but the reprints at a dollar down have been coming off the presses by the hundred thousand. And to top it all, the other day one of the 25-cent pocket-book publishers snapped up nearly a dozen of her thriller-diller-chillers which go into an even 1,000,000 copies for a starter - that’s not mentioning the British editions and the new French market just opened since the war ended.

“It pleases me very much, but I’m not much for publicity,” she revealed. “This is my first interview in ages.”

Miss Knight prefers writing the intrigue story to the murder mystery and has created a couple of detective characters, Blair Margot** and Elisha Macomber, who are becoming as popular as Father Brown and Philo Vance. They’re both at work in her four latest books published during the past 18*** months - “Design in Diamonds,” “Intrigue for Empire,” “Stream Sinister,” and “The Trouble at Turkey Hill.”

“I’ve been thinking seriously about doing a straight novel - incidentally, detective fiction is fast becoming high calibre literature - but I don’t get much encouragement from my agent,” she went on. “If you want sales to drop off for about two years, go ahead,” he tells me. Miss Knight prepared her holder for about the sixth cigarette of the morning and accepted a light from an attentive waiter who was quicker on the draw with a book of matches than the writer with his lighter.

“What I should really do though,” she said, inhaling deeply, “is buy a recording instrument. Then I could dictate my little 60,000 word stories in an ever greater - ahmm - ‘record time.”