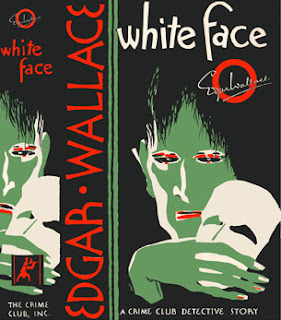 Edgar Wallace
Major characters:
Locale: The Tidal Basin, London
Synopsis: Dr. Mardorf runs a charity children's clinic in the run-down Tidal Basin area of London, and Janice Harman has been his volunteer nurse. Janice is comfortably wealthy from an inheritance, and is the girlfriend of crime reporter Michael Quigley.
Quigley has been following the story of White Face, a thief operating in London. So called due to the white mask over his face, he enters night clubs and steals valuable necklaces right off society ladies.
Janice has been corresponding with Donald Bateman, supposedly a farmer in South Africa. He has written to her hinting for money with which to buy an adjoining property. She intends to marry him, but finds he is an ex-convict confidence man.
Bateman is accosted on the street, and stabbed. After he falls, thief Harry Lamborn goes through his pockets, taking his money and watch; but throwing them over a fence as the law approaches. A knife scabbard (but not the knife) is found under the body, it is traced to Louis Landor, and it found that his wife Inez Landor was married to Bateman - and as she believed he was dead, now finds herself in a bigamous marriage.
Review: This is a fun title by Edgar Wallace. It paints a clear picture of the seamy side of London, a sketchy alley called Gallows Court - where policemen dare not walk alone. It is the perfect setting for Dr. Mardorf's charity clinic.
The taxi driver Gregory Wicks is an interesting character with several things to hide. As a matter of fact, pretty much everyone - with the exception of the police - has things to hide. But all is revealed.
The ending in the remote deserted farmhouse comes as a big surprise, when the identity of White Face is revealed to the reader.
I did expect some closure with reporter Quigley and Janice Harman, but, sadly, nothing was said. The story ends with the capture of White Face.
Posted by Rick Mills at 11:06 AM