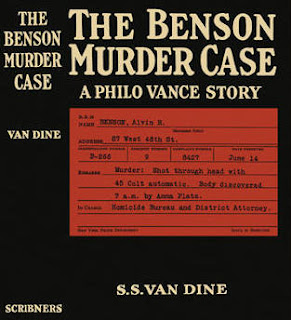 Locale: New York City
Synopsis: District Attorney John F. X. Markham invites Philo Vance along to a murder scene. Broker Alvin Benson has been found dead in his home. Sgt. Ernest Heath is in charge of the investigation. A drawing of the scene is provided: 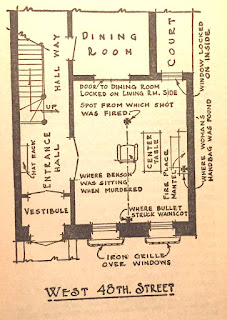 Not much to go on for clues: a grey Cadillac was seen parked outside with fishing tackle sticking out the back, in the room are found a pair of ladie's gloves and a handbag, with the monogram "M. St.C". The housekeeper, Anna Platz, heard the shot in the night but did not recognize it as such.
The handbag turns out to belong to Muriel St. Clair, who had been to dinner with Benson, but denies any involvement. Muriel, however, is engaged to Capt. Philip Leacock, who was none too pleased to find that she has been stepping out with Alvin Benson.
Vance finds that five people had motive and opportunity to do away with Benson, and examines a theory for each to find the murderer. The five:
Review: This is the first of the 12 Philo Vance stories, and it is easy to see how it got readers hooked into the series. Vance is quite pedantic through the first half, describing everything in way too much detail. Then when things get interesting, the story tightens up as Vance goes through the list (above) of suspects. The story improves throughout. The method the killer used to get to the scene and back - unseen - is quite clever. My edition has three sketch maps which are quite valuable in following the action.