Death Blew Out the Match by Kathleen Moore Knight (1935) 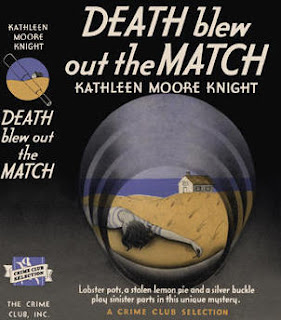 dustjackets.com
Radio dramatization available: I came across this public domain .mp3 recording of this book, which was on the Crime Club radio program in the 1930's-1940's. I have placed it on my web site so you may enjoy it. Here it is (30 minutes): DeathBlewOuttheMatch.mp3
Major characters:
Locale: Penberthy Island, Massachusetts
Synopsis:
Our narrator Anne Waldron and her friend Hazel "Kerch" Kershaw are opening up their summer cottage on Penberthy Island. Leonard Case lives nearby on a hilltop with the village in view. He is recovering from a car accident and is in a body cast. He spends time watching birds and the villagers through a telescope.
Len calls Anne. Through his telescope, he has observed a door open at playwright Marya Van Wyck's cottage; believed vacant. He asks Anne to go secure it. When she does, she looks inside to find the body of Marya, on the floor in front of the fireplace - holding a burned out match. She had died in the act of lighting the fire. The doctor is called, and states it appears to be some fast-acting poison. Elisha Macomber heads up the local investigation.
Initial suspicion is on mysterious David Hyland, who has suddenly appeared on the island and is renting the Mannering cottage. He lurks around and peeps in windows. Simple Sam Layborn and Henry Cahoon have disappeared. Kerch disappears, and in her search for her, Anne is kidnapped.
Review:
This story is written in a diary-entry format which is quite effective and realistic. My edition (Crime Club, 1935) contains a sketch map on the endpapers which is helpful. The parallel story of the tension between the local, Elisha, and a mainland investigator, Coughlin, is evident. The author is quite successful in fooling the reader in suspecting (incorrectly) several characters in turn. Another excellent work by Kathleen Moore Knight.
Posted by Rick Mills at 1:44 PM