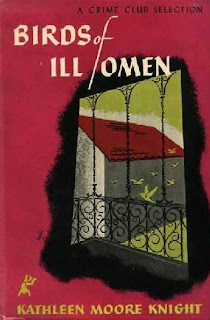 Fantastic Fiction
Major characters:
The Canniffs:
At the San Cosmé hacienda:
And..
Locale: Mexico
Synopsis:
Bitchy Louise Canniff sees a photo of the San Cosmé hacienda guest house in Mexico, and instantly recognizes it from her dreams. She tells wealthy, pushy husband John Canniff he is to buy it for her, sight unseen. John sends his practical, diplomatic son, Dennis Canniff, down to inspect it and make an offer.
Dennis meets with proprietor Toni Lind, and finds her unwilling to sell. He finds other family members live there in seclusion: widowed 97-year old Don Antonio Salazar, Toni's invalid mother, and her brother Peter Lind, who has blinded in the war. Coincidentally, two species of birds arrive at the same time, which legend has it portends death.
Louise and John arrive. Louise encounters 97-year old Don Antonio Salazar while exploring, and he suddenly has an attack and dies. His servant Bartolo hangs himself in grief that evening.
Louise and John continue to try to convince Toni to sell. She states she can not legally do so, with Don Antonio's death the property has passed to her brother Peter.
Louise's daughter Ronnie encounters Peter Lind, to find that he is unaware he is living in a cottage on the grounds of his own home; thinking he is in some hotel. The family, thinking he has amnesia, has kept him unaware he is on their own property.
Review:
Kathleen Moore Knight again creates a colorful exotic atmosphere, perfect for us reading during a New England winter. The despicable Canniffs are the ugly Americans you love to hate, except for son Dennis who somehow turned out a decent human being.
As the story winds on, it becomes a bit of struggle remembering the various tangled family generations (there are four present) and relationships; but it does not detract from the story.
The enjoyable, developed characters are Toni Lind, Dennis Canniff, and (surprisingly) Peter Lind.
The climactic scene takes place in an abandoned chapel, and has a Hitchcock feel to it (Birds? Abandoned chapel? What could possibly go wrong?). Despite the title, the birds are a minor aspect of the story, and their role is reminiscent of the rooster crowing when Peter denies the Lord three times (Mark 14:30).
The ending didn't quite play out as I expected it to, leaving it somewhat to the imagination; yet still a satisfying conclusion.
Posted by Rick Mills at 1:45 PM