The Murder at the Vicarage by Agatha Christie (1930) 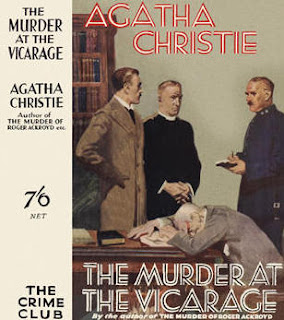 dustjackets.com
Major characters:
Locale: Village of St. Mary Mead, England
Synopsis: Our narrator, the Vicar Len Clement, is called away to visit a dying parishoner. When he arrives, the parishoner is fine and the phone call apparently a hoax. When he returns to the vicarage, he finds artist Lawrence Redding rushing out in a state of excitement, and local magistrate and churchwarden Colonel Lucius Protheroe shot dead in the vicar's study.
Redding had been painting portraits in a small studio on the vicarage grounds. One is of the colonel's daughter, Lettice Protheroe (in her bathing suit, quite scandalous); the other of the vicar's wife, Griselda Clement. The vicar finds Redding had been having an affair with the colonel's wife, Anne.
Redding immediately confesses to the killing. Then Anne confesses to it as well. The authorities believe neither one. Miss Jane Marple, who lives next to vicarage and observes all, states there are exactly seven people in the village who had motive to do away with the colonel, but will not reveal her list.
Review: - Miss Marple #1 brings us to a quiet little village where everyone knows everything. My edition has three separate little maps (the village, the vicarage grounds, and the study) so it is easy to envision the locale.
My eyes start to glaze over when mysteries feature someone changing the time on a clock, as it brings in two separate timelines of events to try to understand. Various mysterious events occur, yet all are neatly tied in at the end.
Some of the occurrences stretch belief a bit - such as a phone call to the police being connected to a wrong number - which just happened to be Miss Marple's - and the caller blurting out events to her without realizing it is not the police at the other end.
The distracting event (I won't reveal more) involving carrying around a large rock seemed a bit far-fetched, but it is an entertainment.
Regarding Miss Marple's list of seven suspects (which she reveals at the end), I was making my own list as I went along and only had four of the same ones!
I look forward to more of the Miss Marples.
Also see this review by Bev Hankins on My Reader's Block.
Posted by Rick Mills at 5:52 PM