Bells for the Dead by Kathleen Moore Knight (1942) 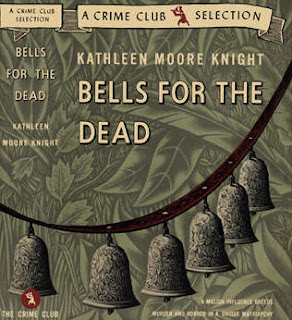 Locale: Guatemala
Synopsis: World War II is in progress as Joan Thorntree, our protagonist, has married Jeremy Thorntree in New York after a brief romance, and he brings her to Guatemala to Casa Serena, the lavish family estate; a magnificent, isolated castle perched high above the water.
Joan is immediately resented by Madame Thorntree, who considers herself the one to choose a bride for Jeremy; as well as companion Señora Ynez Pidal who really runs the place. Madame tells Joan she will cut them (Jeremy/Joan) out of her will and instead name Carla Thorntree as heir.
At night, the sound of bells is heard coming from the water. The servants are frantic, they know the legend that the bells foretell a death.
The next day, Joan is sunbathing and hears a scream, and sees Carla fall to her death from the high patio. Joan rushes to the edge and peers over, breaking her fingernails and getting her hands dirty - circumstantial evidence that she pushed Carla over - her motive being the inheritance.
The bells sound again.
Review: Last night I dreamt I went to Casa Serena again. Oh, this SO Rebecca! Coming out just two years after the famous film, the influence is clear.  As in the book/film, the naive new bride jumps into a spontaneous marriage, and comes home with her spineless husband to her magnificient sight-unseen estate (Casa Serena); only to the resentment of everyone in the family - who all just want to get rid of her by framing her for a convenient murder! And even her name is Joan (the role is played by Joan Fontaine in the 1940 film). The creepy housekeeper Mrs. Danvers is replaced by creepy Señora Ynez Pidal, who sneaks around, complete with high-necked black dress.
The story glides along with the reader taking in the scenery when it takes a sudden, jarring turn about 3/4 in - when you are starting to wonder 'so where's the detective, anyway?' The reader expects old Madame Thorntree, confined to her bed, to be the next one to go the way of the bells ... but surprise, she gets a shot of adrenaline and turns into the energetic investigator! Her actions and speech even mimic Elisha Macomber of the Pernberthy Island series. She is still confined to bed, but teams up with Joan to set a trap for the murderer.
Posted by Rick Mills at 10:32 AM