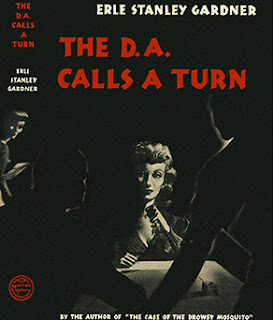 
#6 of 9 in the Doug Selby series. The full series is:
Major characters:


Synopsis: Sheriff Rex Brandon receives a phone call on Thanksgiving evening. A man identifies himself as Carleton Grines, and wishes to turn himself in for car theft. As Brandon and D.A. Doug Selby head out to pick him up, they encounter him coming the other way just as Grines’ vehicle crashes into another car and a truck. He is dead.

As they view Grines’ body later in the morgue, it is apparent his cheap clothes do not fit. His expensive, hand-made shoes lead to a tentative identification, not of Grines, but of wealthy grocery chain owner Desmond Billmeyer. Brandon brings in Carmen Freelman, who works for Billmeyer, and identifies the body as that of Billmeyer.

Brandon brings in relatives of Grines to view the body, they identify it as Grines.

The story is pieced together. Ten years ago, Grimes was sent to jail in Oregon (wearing the cheap clothes), and escaped during a fire - although it was believed he had died. He suffered a head injury during the fire, causing amnesia. He put together a new life as teetotaler Desmond Billmeyer and began a successful grocery chain. He had been drinking the night of the car accident, which brought back his memory as Grines. He apparently retrieved his ten-year-old clothing and put it on again. The mystery is: where was the clothing all this time? and what caused him to start drinking?

Review: Oh, this one was the most blah of the Doug Selby's thus far. No real drama. Selby and Brandon just cruise sleepily through this one. A. B. Carr is too polite and likable. Inez Stapleton has lost her jealousy and is just a pal. Sylvia Martin follows along from habit.

Three more Selby's in the series, I am sure things will pick up after the war.
Posted by Rick Mills at 6:50 PM