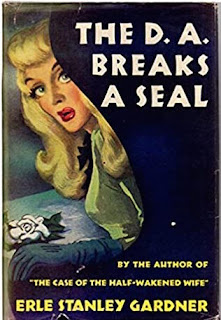 #7 of 9 in the Doug Selby series. The full series is:
Major characters:
Locale: Madison City, California

Synopsis:  Major Doug Selby is arriving home on a furlough from the Army, prior to heading out to the Pacific in the waning days of WWII. He notices a man and woman on his train wearing gardenias. As they alight at the Madison City, attorney A. B. Carr is waiting for them on the platform - and Selby realizes the gardenias are a signal so they recognize each other.

Selby runs into old flame - now attorney - Inez Stapleton. She is working on a contested will case, against A. B. Carr.

Word comes of a dead body found in the Madison Hotel. Selby accompanies Sheriff Rex Brandon to the scene, where they find Fred Roff deceased from poison in his room. He has a gardenia also. A blonde bombshell, Anita Eldon, is in the adjacent room, also with a gardenia. It appears all the gardenia wearers may be parties to the contested will case.

While D.A. Carl Gifford tries to discover evidence to prosecute hotel waiter Henry Farley for the murder, the contested will case goes to trial; as Selby tries to sort out the various gardenia-wearers. The trial comes to an abrupt halt when of the witnesses is poisoned.

Review: The previous Selby novel, The D.A. Calls a Turn, was a low point in the series; but in this novel Gardner and Selby are both back in good form. The gardenia club is an interesting twist, and we have two simultaneous cases (poisoning, contested will) heading to trial; with some obscure link between them. Selby is no longer D.A., but gets involved by being associated with old flame Inez Stapleton; who again is portrayed as breaking down in tears when things go badly - not a good attribute for an attorney; and this distracts from the story.

The writing is very well done, one of my favorite sentences describes the deceased as he lies on the floor:


His bifocal spectacles had been pushed into one-sided incongruity by his fall and in some strange way lent an oddly facetious note to the occasion, as though these man-made aids to vision were somehow jeering at the final destiny of the eyes they had served.

The revelation of the murderer was a surprise, as this person served a minor role; and their connection to the victim a stretch. Nonetheless, a strong Doug Selby yarn.

Also see this review by Bev Hankins on her blog, My Reader's Block.