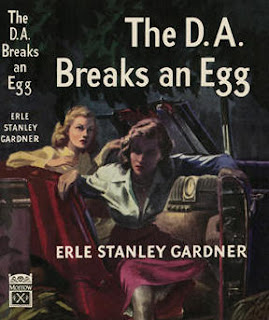 Synopsis: Dorothy Clifton is driving to Madison City to meet her fiancé's family (The Lennox's), and is apprehensive since they seem so high-society. While there, someone borrows her car - and returns it - but there is a purse in the back seat belonging to a Daphne Arcola.

That night, a woman's body is found stabbed in a park - but no purse. She is traced back to her hotel room, and appears she is Daphne Arcola. While D.A. Doug Selby and Sheriff Rex Brandon are looking around the room, lawyer A. B. Carr shows up; looking for Daphne, who he says is a friend of his wife Eleanor Carr.

About the same time, a burglar enters the Lennox home and makes off with some jewelry.

Later, Doug Selby returns to the hotel room for another look, and find an indignant woman in the room who claims she is Daphne Arcola, and what are they doing in her room anyway? No good answer for that one. Looks like the I.D. on the body wasn't too good. Turns out the deceased is a private detective, Rose Furman, who bears a superficial resemblance to Daphne Arcola.

Review: Well, this concludes my trip through the nine Doug Selbys, and it is sad there are no more. They are more satisfying than the Perry Masons. Next I am going to read some of the other non-Perry Masons, there are a few.

As this series progressed, attorney A. B. Carr gets more and more respectable (and more believable). The plot got a bit confusing when trying to follow who-what-when with the two redheads (Daphne Arcola and Rose Furman). The final chapters introduced some new characters who may have had a passing mention earlier but I did not remember them. I did find myself wondering if I was in the same book for a while. Other than that, a good read from Madison City.