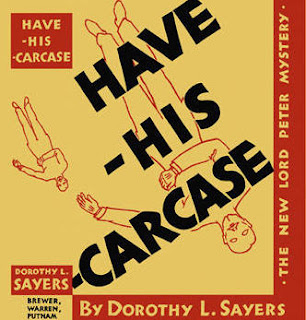 Major characters:
Locale: Wilvercombe, on the coast of England

Synopsis: Harriet Vane is hiking along the coast in a remote area and comes across a dead body - his throat cut - perched on a rock at the tide line. She retrieves a razor as being the likely weapon, and walks to the nearest town for help, encountering hiker Julian Perkins along the way.

After reporting the body, Harriet stays at the posh Hotel Resplendent. The hotel employs four "gigolos", or professional dance partners for the guests. They are Antoine, Paul Alexis, Doris, and Charis. The police believe the deceased to be Paul Alexis, but have yet to recover the body. Hotel guest Flora Weldon is distraught, she had believed she was to marry Paul Alexis, but the other gigolos suggest that ha ha, that was just his usual line to the middle-aged ladies; she should have known that.

Lord Peter Wimsey arrives and in between marriage proposals to Harriet takes on the tracing of the razor. He finds it was last in the possession of a William Bright. Perhaps Bright and Perkins are the same person?

The situation is complicated when it is found that Alexis believed himself to be Russian royalty, awaiting a return to mother Russia. A series of coded messages between him and someone in Russia adds to the intrigue.

Narrowing down the suspects is pretty straightforward, there aren't too many - but it is quite a puzzle to place them in space and time to have done the murder. One by one, Wimsey's theories are found to be incorrect.

Review: This starts off in the vein of John Dickson Carr, with Harriet Vane finding a body perched on a rock surrounded by smooth sand, with two sets of footprints: hers and the deceased. The episode of the discovery of the body is quite amusing:

The plot includes a secret message encoded using the Playfair Cipher, and includes an excellent description of how to encrypt and decrypt messages using it. I compared it to a description I had in a textbook, and it is not only correct, but explained much better using everyday language. (The wikipedia article linked above also cites Have His Carcase as a reference).

The repeated testing of theories by placing the suspects in time and space wore on and got a bit tiring when breaking down events in small intervals. The murderer is indeed found at the end.