Alias His Wife by Stephen Ransome (1965) 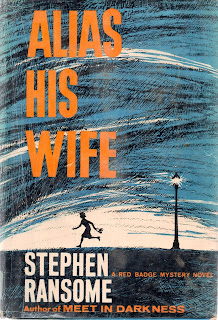 About the author: Frederick Clyde Davis (1902-1977) was an American pulp writer. He was educated at Dartmouth College, Hanover, New Hampshire, and became a professional writer at the age of 22. Davis wrote several novels featuring his series detective, Professor Cy Hatch. He also wrote as Murdo Coombs, Stephen Ransome and Curtis Steele. (Fantastic fiction)

Synopsis: Ross Quarent is an assistant prosecutor. Paula is his second wife, after a brief first marriage to Carol Wilson. Paula begins receiving anonymous letters addressed to Paul Spencer (her maiden name). A letter states their marriage is invalid, as Ross was never divorced from his first wife Carol. This would make Ross a bigamist, and subject to prosecution; which would ruin his career.

A stranger, Charles Ritchie, appears on the scene and approaches Ross with questions about what it would take to influence a court case. It appears Ritchie may be blackmailing Ross by sending the anonymous letters.

Carol Wilson is back in town, staying at a hotel in the next room to Ritchie and his girlfriend (her sister). Marie Greer. Carol admits to Ross the divorce she pretended to have granted was never done. Ritchie is then found dead in his hotel room. Ross is faced with a murder investigation while trying to avoid becoming a suspect himself.

Review: This is a tight little mystery with a unique twist (the fake divorce). The 1960's setting has not aged well, though; as the wives first responsibility is making cocktails for the hard-working husbands as they arrive home, constant social alcohol use by everyone, and the fear that their daughter - now apparently born out of wedlock - will be branded "illegitimate". If you can overlook these cringeworthy elements, it does make a good story.