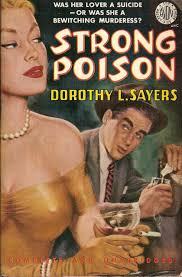 Synopsis: The book opens with Miss Harriet Vane on trial for murder of her former live-in boyfriend, Philip Boyes. He had died of arsenic poisoning, and circumstantial evidence points to Vane. She had made regular purchases of arsenic which coincided with Boyes' periods of illness, eventually resulting in his death. Her explanation is that it was research for her new book on poisons, Death in the Pot.*

The trial ends with a hung jury. A second trial will be scheduled. Lord Peter Wimsey, who attended the trial, is convinced Vane is innocent, and vows to use the remaining time to prove it; as well as enable their marriage. Three big questions: Who had a motive? If Harriet didn't do it, who did? And how was the poison administered?

Wimsey seeks out help from his secret detective agency, The Cattery - ostensibly a typing agency but populated by women who have various detecting skills.

* Biblical reference from a suspected poisoning incident recorded in 2 Kings 4:40

I thoroughly enjoyed this novel. When reading Sayers, I am always torn between rushing through to find out what happens vs. lingering over the perfect expressive language.

The episodes of the ladies from The Cattery doing their undercover work are hilarious - as Miss Joan Murchison endures a fervent evangelical religious service in order to learn lockpicking, and Miss Kitty Climson infiltrates the home of Rosanna Wrayburn and conducts a fake seance to discover the location of a missing will.

Harriet Vane has but brief appearances at beginning and end - setting the stage for a marriage to Wimsey? Not sure, I should be reading these in order!

PS> The paperback cover illustration above has no relation to the story.