The Secret House by Edgar Wallace (1919) 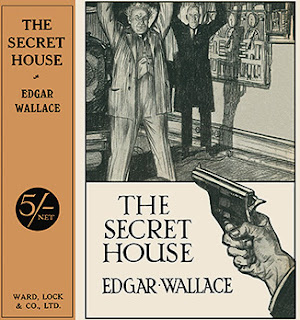 Synopsis: Recent immigrant Ernesto Poltavo obtains a position as translator for Montague Fallock. Fallock publishes a newsletter “The Gossip’s Corner” for the servant class. Many of the letters to the newsletter arrive in French and Italian, and Poltava translates them. Newsy items go in the newsletter, but scandalous items are reserved by Fallock for blackmail. Poltava uses his position to obtain access to society, posing as ‘Count’ Poltavo.

One blackmail victim is Lady Constance Dix. Her boyfriend, millionaire Gregory Farrington, opens his door one night to find two men shot dead. T. B. Smith of Scotland Yard investigates. Later, Farrington attends the theatre with journalist Frank Doughton, Frank's girlfriend Doris Gray, and her aunt Lady Patricia Dinsmore. An attempt is made to shoot Farrington. Farrington disappears, a suicide note is found, and a headless body with his I.D. found in the Thames. T. B. Smith suspects Farrington is still alive, and the body a substitute.

The action moves to The Secret House, a mansion built by an eccentric American, invalid Jim Moole; known friend of Farrington. Smith arrives to look for Farrington. Moole’s butler/physician, Dr. Fall, allows Smith to look around. The house has many electrical gadgets and trick rooms which can change places. Lady Constance Dix disappears and is held captive in the Secret House.

Review: The setup with the scandalous newsletter scheme is interesting, and the job offer made to Poltavo by Fallock (wearing a bag over his head) reminds me of Sherlock Holmes' Red Headed League. This book gets pretty much everything thrown at the reader: blackmailers, a woman (Doris Gray) forced into a marriage she doesn't want, a henchman (Poltavo) after her himself, and a dead body in the river with the head missing and a suicide note attached (figure that one out!)

Once we get to the Secret House, it begins to look like a classic James Bond adventure: the beautiful woman held captive, the master criminal in his elaborate refuge full of booby traps, into which the hero (T. B. Smith) finds his way; capture by the master criminal who spends a lot of time and pages in taunting repartée before doing away with him. They never learn - all that added delay allows the hero to be rescued every time!

Overall, a good first half is diminished by the fantastic science-fiction of the second half.

If you are a fan of mansions with elaborate built-in electrical tricks, you may also enjoy Spider House by Van Wyck Mason (1932).