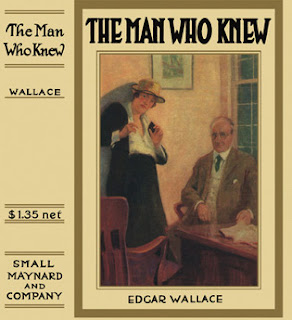 Synopsis: Wealthy John Minute is home with his secretary, Jasper Cole; an amateur chemist. Jasper is interested in May Nuttall, a local mission worker; but so is Minute's nephew, Frank Merrill.

Meanwhile, a (unnamed) servant on his way to a job interview drops dead on the street. Constable Wiseman is standing over the body when Saul Arthur Mann appears, examines the dead man's pockets, and reels off a litany of facts about the person. Mann is "The Man Who Knows", who "collects facts as some men collect postage stamps". He runs an "information bureau", commonly known as a newspaper clipping service. He is the Google of his time. Similar to a newspaper morgue, news items are clipped and gathered and filed; and information sold to anyone who desires; usually Scotland Yard. Mann introduces a new twist - the news items are filed by number, not name; and only he has the index which reveals which number is used for each person.

After much discussion and positioning regarding wills, inheritances, and which suitor (Cole or Merrill) will get May Nuttall, John Minute is found shot in his home. Circumstantial evidence points to Merrill, who is tried and acquitted on a lack of direct evidence.

Additional intrigues occur. Another servant (Feltham) dies, from inhaling poison. Jasper Cole has been keeping a second house in a sketchy part of town known as Silvers Rents; which has a ladder but nothing to climb to. There is another man masquerading around as "Frank Merrill" who bears an amazing resemblance. There is a quiet mystery woman who is kept under wraps. There is a corrupt cop (Henry Crawley / Smith) who has some hold over her.

Review: An excellent read, with many parallel mysteries all at once. Mann's information bureau is a fascinating look at informational archival pre-internet. Who has the role of the detective? Not Saul Arthur Mann, as you may expect. He ran down facts, but is shocked at the revelation of the murderer. It takes some plodding work by Constable Wiseman and a group denouément to get at the truth, and the complex solutions are worthy of Agatha Christie. This is the best Wallace I have read thus far.