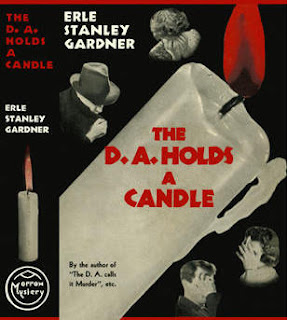 Synopsis: The book opens with D. A. Doug Selby and Sheriff Rex Brandon giving a young man, Ross Blaine, a friendly talking-to regarding a bad check he passed. Then Selby and Brandon head to The Palm Thatch roadhouse to warn the owner, Oscar Triggs, to cut out the backroom gambling there. On the way they stop and check on a hitchhiker, Emil Watkins. That night Selby is called to look at an unattended death at the Keystone Auto Camp. The deceased turns out to be Watkins, the cause apparently is carbon monoxide poisoning from a defective heater. Two girls in an adjacent cabin, Audrey Preston and Monette Lambert, tell them their dates - Robert Gleason and Tom Cuttings - who rented that cabin - are at the Palm Thatch.

Selby and Brandon suspect there is more to the death than appears. They go to the Palm Thatch to find a game in progress, with Ross Blaine, George Stapleton, and others. The hostess, Madge Trent, has disappeared, and the focus turns to the search for her. Selby teams up with reporter Sylvia Martin to find Trent.

Review: Right away we are in familiar Erle Stanley Gardner territory: a roadhouse with gambling in the back room, a slinky blonde hostess, some fast cars, and a dead body in a cabin at a motor court. D.A. Selby and Rex Brandon throw their weight around without the niceties such as search warrants. This is a good page-turner, and like many Gardners, best to devour in one or two sittings before you start losing track of who's who. The episode of the L.A. police on a gambling raid is quite enjoyable, with a specialized team who have done it before making quick work of the gambling joint. A sledgehammer is put to good use.

Selby's secretary from the first book, appears briefly (unnamed) once in this book. However, Inez Stapleton now chums around with Selby, and the book ends on a confrontational note, with her entering law school and vowing to meet Selby again, this time as a defense attorney; foreshadowing a later title in the series. Selby remains cozy with Sylvia Martin.

(The candle of the title turns out to be just a metaphorical candle).