The Man Who Didn't Mind Hanging by Nancy Barr Mavity (1932) 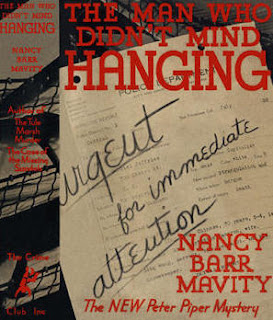 dustjackets.com
About the author: Nancy Barr Mavity (1890 - 1959) is the author of a series of six mystery novels about crime reporter James Aloysius "Peter" Piper. Nancy Barr Mavity taught philosophy at Connecticut College, New London, Connecticut. She was a newspaper woman. She was a feature writer of the Oakland Tribune. In this capacity, she was the first woman to spend a night in Folsom State Prison, where she had gone to cover the pardon hearing of Warren K Billings. She lectured extensively and contributed to magazines. (from a Wikipedia article). You can read about her history here.
This is Peter Piper #5 (of 6). The full series is:
Major characters:
Locale: San Francisco
Synopsis: Philanthropist Gabriel Jeffries is found stabbed to death in his home, and the police quickly arrest his manservant/cook, Sing Wing, on finding some circumstantial evidence of his presence in the murder room. Newspaper reporter Peter Piper feels it is a rush to judgement, and approaches a leader in the Chinese community, millionaire Fon Ng Chee, to see what can be done to defend Wing. Chee hires attorney Sam Hardwicke.
Piper and Hardwicke visit Wing in jail, and find he is calmly resigned to whatever is before him, saying he doesn't mind hanging if that is his fate.
Piper interviews Jeffries' wife, Christina Cameron, a renowned concert pianist - and she is distant and aloof, not caring much about her husband's murder. Jeffries had visitors the night of the murder: Elissa Berryman, an actress hoping to get Jeffries to support her theatre; and her husband Everett Berryman, who was against the whole idea. Jeffries' rent collector, James West, was also in.
Wing is brought up to an inquest led by coroner Joseph Hayward who is unable to keep proceedings under control. The inquest turns into a media circus and quickly devolves into chaos. Wing is bound over for trial, and Piper pins his hopes on identifying a mystery woman who is interested in the case.
Review: I love a chaotic courtroom scene and the inquest - which occupies the middle third of the book - is a doozy, far beyond Erle Stanley Gardner's worst nightmares. Wing is tarted up in a stereotypical Chinese costume, and sits observing silently as proceedings quickly fall apart. Witnesses Elissa Berryman will only talk about herself, Christina Cameron faints dead away, and James West gets hysterical on the stand. The press table reporters are passing notes around and heckling (making 'meow' sounds when a lady witness makes a 'catty' remark), while society ladies in the audience jockey for best position to be in the photos. An excerpt:

Somewhere among the spectators a woman screamed, releasing the intolerable tension. But no one noticed. For one moment Christina Cameron had stood, erect and terrible. The next, with no preliminary sign, she had fallen to the floor. The reporters leaped from their seats, stampeding for the door. They stumbled over the clerk, vainly trying to stem the engulfing tide in his quest for water. The voice of the coroner clucked agitatedly behind them, first pleading for order, and then, in view of the empty, overturned chairs at the press table, announced an adjournment until two o'clock. The reporters rushed into the hall, clamoring for telephones.

Not only do we get the inquest, but we get the trial also, later on. An excellent book complete with lots of uncontrolled anarchy in the courtroom and the usual always-frantic newspaper crew racing against a deadline. This was the best Mavity so far - and I have one more to go!

Note: For other mysteries which feature a concert pianist who has suffered a hand injury and is unable to play again, see Five Passengers From Lisbon by Mignon Eberhart (1946) and Deep Lay the Dead by Frederick C. Davis (1942).

Be sure to visit The Mystillery for my mystery reading challenges!