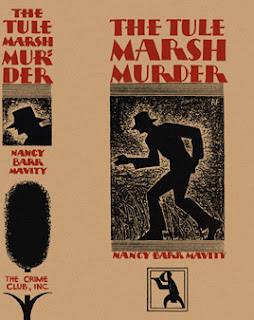 dustjackets.com
About the author:  Nancy Barr Mavity (1890 - 1959) is the author of a series of mystery novels about crime reporter James Aloysius "Peter" Piper. Nancy Barr Mavity taught philosophy at Connecticut College, New London, Connecticut. She was a newspaper woman. She was a feature writer of the Oakland Tribune. In this capacity, she was the first woman to spend a night in Folsom State Prison, where she had gone to cover the pardon hearing of Warren K Billings. She lectured extensively and contributed to magazines. (from a Wikipedia article). You can read about her history here.
This is Peter Piper #1 (of 6). The full series is:
Major characters:
Locale: not stated
Synopsis: Millionaire Don Ellsworth consults Dr. Cavanaugh - psychiatrist and amateur detective - to find his missing wife, actress Sheila O'Shay. Ellsworth had not even reported her missing to the police, that was done by her dresser (stage mother) Mrs. Nellie Kane.
James Aloysius "Peter" Piper, crime reporter, is assigned to cover the story. Peter becomes enchanted by Dr. Cavanaugh's adopted daughter, Barbara Cavanaugh. He finds that Don Ellsworth had been engaged to Barbara, before dropping her to marry Sheila O'Shay.
A body is found in the hills above the tule marsh, burned beyond recognition following a grass fire. Dr. Cavanaugh examines an unburned bit of skin/hair and finds it a match to Sheila O'Shay. Peter finds that Ellsworth only married her to avoid a breach-of-contract suit; and suspicion is he murdered Sheila in order to get back together with Barbara.
Peter finds the Ellsworth maid, Ethyl, is a fan of detective stories. Peter assumes the clothing and mannerisms of Sherlock Holmes to impress and interview Ethyl. It pays off, he finds there was a visitor to Sheila before she disappeared. Peter and Dr. Cavanaugh search Sheila's room and find a threatening note signed by David Orme.
Peter learns Orme is missing the tips of two fingers, and traces him to a nearby auto campground. He interviews Orme, who is using an assumed name of Daniel Osgood. He finds him rather simple and agreeable, and turns him in to the sheriff. But there is more than meets the eye in Orme.
Review: This is the first of six Peter Piper stories. We are introduced to the controlled chaos of a daily newspaper, perfectly rendered as Mavity was a news reporter herself. She knows her way around a courtroom, as Randal S. Brant writes:

In one case, Mavity used a ladder to climb through the window of a vacated jury deliberation room in order to gather up the contents of the wastebasket, writing a story for the next morning’s edition on exactly how many ballots the jury had taken and what the votes were.

An amusing episode is Piper's interview of the maid Ethyl. After learning she is a fan of detective stories, he assumes the dress and manner of Sherlock Holmes and sends her a mysterious note inviting her to meet. This leads to discovery of a vital clue.
The description of the auto campground and its inhabintants is a bleak reminder of depression days, and reminded me of the camping scenes in The Grapes of Wrath.
The courtroom scene is even better than an Erle Stanley Gardner. A highlight is the "Q+A Twins", two newspaper stenographers assigned to cover the proceedings. They sit side by side, one recording only the questions to witnesses, the other only recording the answers!
This is an enjoyable, fast-paced story and has started me on the search for the remaining titles in the series. I have two, only four to go!
Posted by Rick Mills at 11:23 AM