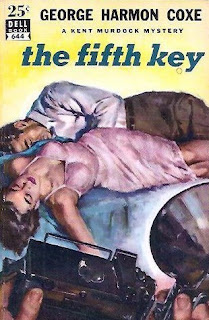 goodreads
Nov 17 2021: reading now - please check back again.
About the author: George Harmon Coxe (1902-1984) began writing in the nickel and dime pulps for pennies a word. He was a particularly prolific author, writing a total of 63 novels, his last published in 1975. The Mystery Writers of America named him a Grand Master in 1964. (condensed from fantastic fiction)
Major characters:
Locale: New York City
Synopsis: Clarion photographer Kent Murdock (our protagonist) travels from Boston to New York to photograph production of a hit radio program, Sob Sister. The program is written by Sheila Vincent, who used to work at the Clarion.
Kent attends the production and takes the photos. After the program, he takes Sheila back to her apartment and they have drinks. The drinks were drugged, and Kent passes out. When he awakes in the morning, he is on the couch with Sheila - but she is dead from strangulation. There are remnants of film packaging on the floor, suggesting someone took photos after they were out in order to frame Kent for the murder.
Kent pretends to know nothing about the murder. He gets Sheila's secretary, Dale Jordan, to accompany him back to Sheila's - where they "discover" her body together. But it is no longer on the couch - it is stuffed into the closet. Kent soon discovers that pretty much everyone had a motive to want Sheila dead.
The identity of the murderer appears limited to someone who had a key to the apartment, of which there are five; and only four are accounted for:

Review: It was interesting to read of the radio production studio, which brings us back to the golden age of radio - complete with announcers, rehearsals, dramatic performers, sound effects men, and even an orchestra!
Kent Murdock turns from his photographer role into the detective role, and does a great job in classic noir style - following people, lurking in dark corners, and engaging in fisticuffs with various bad guys. This is a great read to escape to the world of the 1930's-1940's.

Be sure to visit The Mystillery for my mystery reading challenges!