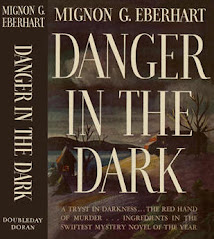 dustjackets.com
About the author: (from Goodreads): Mignon Good (1899-1996) was born in Lincoln, Nebraska. In 1929 her first crime novel was published featuring 'Sarah Keate', a nurse and 'Lance O'Leary', a police detective. This couple appeared in another four novels. Over the next forty years she wrote a novel nearly every year. In 1971 she won the Grand Master award from the Mystery Writers of America.
Locale: St. Germain, a suburb(?) near Chicago
Synopsis: The story concerns three siblings, their children, and the family business. The siblings own the Haviland Bridge Company; following the passing of their father ("Old Rowley") who was the founder. Now an outsider, Ben Brewer, is president. The siblings are:
Daphne considers Rowley and Dennis as her cousins, although only so by marriage.
Dennis Haviland reads of the engagement of Daphne to coarse tough guy Ben Brewer, president of the Haviland Bridge Company. Dennis flies to Chicago to see her before the wedding can take place. They meet and she agrees her upcoming marriage is a mistake, and she will run away with Dennis instead. The ceremony is planned to be at her Aunt Amelia's home. They arrange to meet at midnight the night before the wedding, in Amelia's springhouse, and leave from there. They meet, but also find the dead body of Ben Brewer.
Dennis and cousin Rowley Shore take the death in stride, and are primarily concerned the scandal will affect the family business and decide to stage an alternate reality for the police. They place the body in Amelia's home among the wedding gifts ("Oh, a precious sterling silver tea set! Oh, a cozy down comforter! Oh, a fresh dead body!), open the window, and make it appear he was killed in a foiled burglary attempt. The police arrive, and detective Jacob Wait immediately smells a setup.
Gertrude hated having Ben Brewer, an outsider, as president of the company. Now that he is out of the way, she wants Daphne to marry her son Rowley instead. This will unite Daphne's considerable inheritance with Rowley's quest to take over as president; and again give the family a strong position in the business. Daphne is aghast, but Gertrude hints she has knowledge of the murder which will implicate Daphne and attempts to blackmail her into the marriage. Meanwhile, estranged Archie Shore appears on the scene. He tells the siblings he has knowledge of the murder, and will remain quiet if they pay him off. Now we have two blackmailers - and a second murder occurs.
Jacob Wait decides Dennis and Daphne are the guilty ones and places them under arrest.
Review: Right away we have the classic Eberhart triangle set up: the frightened young woman (Daphne) attached to Mr. Wrong (Ben Brewer) and pining for Mr. Right (Dennis Haviland). You just know Mr. Wrong will come to a bad end, and Mr. Right will get the blame. This triangle is spiced up with the presence of a second Mr. Wrong (Rowley) who wants Daphne for himself.
This is an enjoyable read and there are a couple of nice red herrings thrown in to confuse the issues. The infighting among the family - particularly between bitchy, entitled Gertrude and saintly Amelia - gives the reader a sense of schadenfreude: 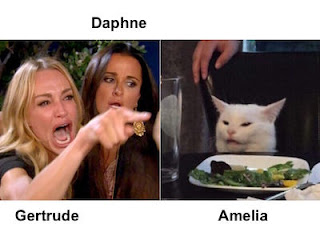 I hope you know what a springhouse is. They are common in my area and generally not the first choice for a tryst, but they are dark and damp as described in the text. I have not seen any with stained glass windows, though! The dustjacket art (above) shows it just to the left of the D in Dark. My 1941 Triangle Books reprint has a nice little engraving on the front cover, even showing the 9-light stained glass window! I first thought that was a little stick figure of Daphne to the left of the springhouse, but upon closer inspection it is a little fir tree. 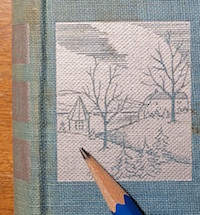 Be sure to visit The Mystillery for my mystery reading challenges!
Posted by Rick Mills at 7:48 PM