The Case of the Missing Sandals by Nancy Barr Mavity (1930) 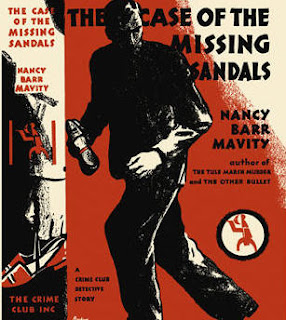 dustjackets.com
About the author:  Nancy Barr Mavity (1890 - 1959) is the author of a series of six mystery novels about crime reporter James Aloysius "Peter" Piper. Nancy Barr Mavity taught philosophy at Connecticut College, New London, Connecticut. She was a newspaper woman. She was a feature writer of the Oakland Tribune. In this capacity, she was the first woman to spend a night in Folsom State Prison, where she had gone to cover the pardon hearing of Warren K Billings. She lectured extensively and contributed to magazines. (from a Wikipedia article). You can read about her history here.
This is Peter Piper #4 (of 6). The full series is:
Major characters:
Locale: San Francisco and environs
Synopsis: Reporter Peter Piper gets wind of a witchcraft cult, the "Luna Colony" in the hills outside San Francisco. It sounds shaky - District Attorney Hubert Graham tells piper that a Lewis Tanner has lost $20k when his wife turned his money over to Luna, the cult leader. Piper sets out to investigate for a feature - or exposé - story. He finds a fenced compound of individual cottages guarded by watchman Albert Jackson, who is blind. He is admitted and meets and interviews Luna, a beauty who claims to be a witch. She favors wearing a tiara with a crescent moon, filmy black negligee-like gowns, and high heel sandals.
The next day, Piper gets a report of a death at the compound. Luna is dead. She was found in her cabin, stabbed and shot. In her arms are a bundle of love letters written by Earl Vincent, who supposedly has a girlfriend Ruth Morgan too. Piper prowls around and find a bank book in the name of Mr. & Mrs. Merrill Anthony - suggesting that Luna is really Mrs. Anthony. He is also puzzled that she is still wearing her black gown, but her sandals are nowhere to be found. Of more immediate importance - Earl Vincent is nowhere to be found, and he is the #1 suspect. Piper sets off on a lead to locate Vincent on a ship before the police find him.
On a parallel trail, efforts are made to find Merrill Anthony. He avoids publicity and is just a shadow. He and Luna are found to be knee-deep in a dope smuggling ring. Finally he is found, and soon after is shot - a suicide or another murder? Meanwhile, Lewis Tanner, the innocent bystander bilked of his $20k, is found dead after apparently being run over by a train.
Review:
Another Peter Piper with great scenes of the chaotic newsroom and the tensions between the reporter (Piper) and his editor (Jimmy Sears).
A puzzle as I was reading: at the 3/4 point through the book, the missing sandals of the title seem to have been dropped. They were mentioned briefly at the beginning but largely forgotten after that, until they reappear at the very end as a trap set for the murderer.
There are some interesting out-of-the-ordinary characters and it is pleasant to see they are treated with unusual respect and acceptance for 1930:
This is #4 of 6 Peter Pipers, and I am fortunate in having found all six. Two more to read!
Looking for my mystery reading challenges? Visit The Mystillery
Posted by Rick Mills at 8:03 PM