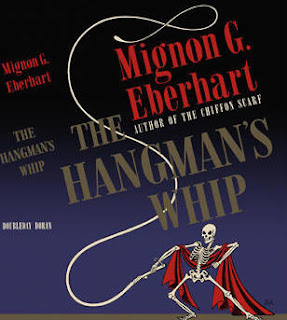 dustjackets.com
About the author: (from Goodreads): Mignon Good (1899-1996) was born in Lincoln, Nebraska. In 1929 her first crime novel was published featuring 'Sarah Keate', a nurse and 'Lance O'Leary', a police detective. This couple appeared in another four novels. Over the next forty years she wrote a novel nearly every year. In 1971 she won the Grand Master award from the Mystery Writers of America.
Major characters:
Locale: Kentigern Village, north of Chicago
Synopsis: Search Abbott, our protagonist, is leaving her Chicago apartment for the family mansion in Kentigern Village, north of Chicago; in response to a plea from Aunt Ludmilla Abbott - and partly to get away from pushy childhood friend Howland Stacy who wants her to consent to a marriage she doesn't want. She will join cousin Diana Abbott Peale and her husband Calvin Peale, and her Aunt Ludmilla.
She arrives to find, to her surprise, her former love, Richard Bohan. She had given up on him long ago when he married Eve Bohan, and now they are headed for divorce. Search and Richard confess their love for each other, when Eve arrives to say she has changed her mind about the divorce.
Aunt Ludmilla reveals someone has made several attempts to poison her with arsenic.
Richard and Search plan a tryst at a guest cottage on the grounds. When Search arrives, she finds Eve hanging - dead. Richard claims innocence, and flees. During the search for Richard, attention also focuses on a mysterious stranger who came looking for Eve, but is also found dead on the grounds. Then it becomes apparent Search has knowledge which can finger the killer, who comes looking for her next.
Review: Right away the requisite love triangle (actually two overlapping triangles) is set up. Protagonist Search, her pursuer Howland Stacy (who is all wrong for her) and long-ago love Richard (who is all right for her). Then we get Search competing with Eve for Richard. Later on we get search competing with Diana for Richard. Everyone wants Richard.
Mignon Eberhart is always enjoyable for her scene-setting, and the innocent girl in peril story line. I enjoyed this book particularly because of the small number of characters, the lakeside vacation home setting, and the continuing drama between them.
Posted by Rick Mills at 11:59 AM