Without Lawful Authority by Manning Coles (1943) 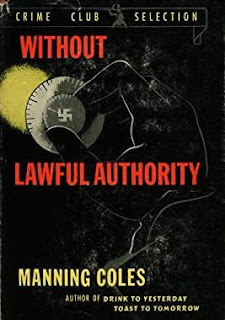 AbeBooks
About the authors: (wikipedia): Manning Coles is the pseudonym of two British writers, Adelaide Frances Oke Manning (1891–1959) and Cyril Henry Coles (1899–1965), who wrote many spy thrillers from the early 40s through the early 60s. The fictional protagonist in 26 of their books was Thomas Elphinstone Hambledon, who works for the Foreign Office.

Synopsis: It is the runup to England's entry into World War II. Jim Warnford is retired and getting bored, staying home and working on his model railroad engines. He has a grudge against Captain Rawson, former military mate, who stole some plans and set up Warnford to take the fall.

Ashling, Warnford's butler, catches a burglar, John Marden, in the act. Rather than turn Marden in the police, Warnford strikes up a friendship with him, and has Marden teach him the arts of burglary and safecracking. Together, they seek to find Captain Rawson to even the score. They come across a couple of brothers, Percy and Stanley Johnson, who have tapped the phone line of the Foreign Service. They tip off the authorities who pick up the Johnsons, who turn out to be a couple of Nazis.

Warnford and Marden are quite successful in tracing out the Nazi spy ring, always one step ahead of Tommy Hambledon. Warnford keeps Hambledon informed of progress, and Hambledon keeps trying to catch up to find out who these two really are.

The climax comes as all parties converge on Morley Park, an insane asylum. Warnford and Marden infiltrate it, with chaos resulting as all the inmates get loose and it is difficult to tell who are the inmates, who are the good guys, and who are the bad guys.

Review: This is the longest Tommy Hambledon book, and the length is required to document all the adventures of Warnford and Marden; who take center stage away from Tommy again and again. They run into various humorous scrapes as can be expected in a Manning Coles adventure.

The highlights of the book are the events in the hotel as Warnford and Marden attempt to capture Rawson, while unknown to everyone, Tommy is locked in the closet. The adventure only becomes crazier and more chaotic as everyone winds up at Morley Park Asylum.

It is an excellent read to settle in and go back to the time of 1938-1939 as events in the story are told against the backdrop of the building Nazi occupation of Europe.