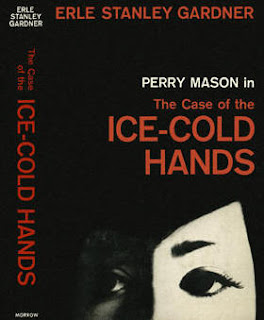 dustjackets.com
Major characters:
Locale: Los Angeles area
Synopsis: Rodney Banks has embezzled about $1000 from his employer, Marvin Fremont. Now Rodney needs to replace it before anyone notices - so he goes to the horse races and bets on a long shot horse. His horse wins, and now he has plenty of money ($14000) to pay it back. The problem is that the authorities may be waiting for him at the horse track cashier's window.
Rodney gives the winning tickets to his sister, Nancy Banks, to cash in. She is hesitant to walk out of the racetrack with that much cash, so she goes to see Perry Mason. Using the name of Audrey Bicknell, she hires Mason to go cash in the tickets. Mason goes and gets the cash, and is accosted by Fremont and a policeman, claiming that since the betting money was Fremont's property, the proceeds of its investment (the bet) are his also. Mason disagrees and gives the cash over to Nancy Banks.
Mason gets a frantic call from Nancy Banks, who is now staying in a motel so no one can find her and the cash. Her story is that she was help up and the money taken. Mason enters her motel room and finds Fremont shot to death in the bathroom. The police find evidence of dry ice having been placed around the body to cool it off quickly, to manipulate the apparent time of death.
Review:  This is the first time I have come across this scheme of speeding up the cooling off of the body in order to give yourself an alibi; although no mention is made of the heavy fog that would occur from loading the bathroom up with dry ice.
One surprising aspect of this book is the small count of characters. My list above is it. Perry Masons usually have a big cast to suspect, so this was a pleasant surprise not having to keep track of all the peripheral people.
The courtroom scene was quite amusing, especially when Hamilton Burger decides that only he can do it right, and takes over the questioning of a witness. He should have known that the first rule of questioning witnesses is to never ask a question if you do not know how the witness will answer! That comes back to bite him.
An interesting companion story could be titled "The Case of the Ice Cold Feet", in which someone slides into bed to find it already occupied by ... a corpse!
Posted by Rick Mills at 4:12 PM