The Case of the Turning Tide by Erle Stanley Gardner (1941) 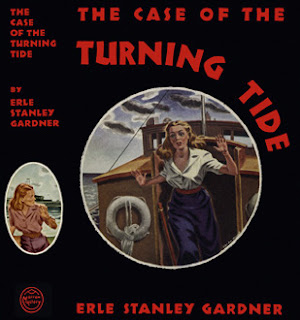 dustjackets.com
This is Gramps Wiggins #1, not a Perry Mason title. The only other Gramps Wiggins title is The Case of the Smoking Chimney.
Major characters:
Locale: fictional Santa Delbarra, California
Synopsis:  Salesman Ted Shale is on the beach, hoping to catch hotel magnate Addison Stearne as he gets off his yacht, in order to close a big deal on paper products. Ted sees a woman fall off the deck of Stearne's yacht, Gypsy Queen II. Ted goes out to rescue her, joined by Joan Harpler, who was on her own yacht Albatross. They retrieve the woman, Nita Moline.  Ted boards the Gypsy Queen II looking for assistance but instead finds two dead bodies, Stearne and C. Arthur Right.
District Attorney Frank Duryea is surprised by a visit from Gramps Wiggins, complete with camping trailer. Gramps is the grandfather of his wife Milred. Frank is called to the yacht club dock to oversee the investigation, and question the three "witnesses": Ted Shale, Nita Moline, and Joan Harpler.
Stearne had been involved in an option to purchase oil property, and was to send a letter of acceptance. Whether he accepted or declined meant a substantial amount to his estate. Further, due to terms of his will, the inheritance path for his estate hinged on whether he or Right died first.
The mysteries facing Duryea are:
As Duryea investigates, Gramps Wiggins tags along and makes several observations that everyone else missed.
Review: One would think the deaths of Stearne and Right are the central theme of this mystery, but they are not. The book focuses on the hanky-panky with the letter of acceptance, and manipulation of evidence surrounding it. These do affect the inheritance path, thus may or may not provide motive for a killer. No one really looks at the two deaths until the final pages.
Gramps is a character - a spry little hard-drinking outdoorsman with poor grammar - a bit out of his element which is more likely a desert hermit. He is introduced right away but doesn't contribute much until the end. He does teach Duryea an interesting trick in how to an interview a reluctant witness.
The dust jacket blurb by Gardner states: "Reading it over, now that it is finished, I can find numerous technical errors..." and so it is:
The blurb also mentions Gardner has made an effort in this story to present events in a realistic manner as they unfold, without planting of unnecessary 'clews'. In this effort it succeeds. One more Gramps novel to go.
Posted by Rick Mills at 11:38 AM