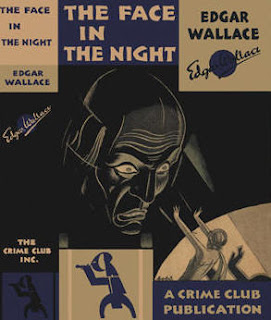 Edgar Wallace
Major characters:
Locale: London - the setup is like this:
Synopsis: Laker, a criminal courier, meets with his boss, Mr. Malpas, in London. He wants to see his face, hidden by a false chin over his face. Malpas reacts much as the Phantom of the Opera did -  Laker is dropped into the Thames shortly after.
Audrey Bedford has been scraping a living from chicken farming. Destitute, she sells the farm and heads to London to stay with her sister, wealthy Dora Elton and her husband, Martin "Bunny" Elton. Captain Richard "Dick" Shannon of Scotland Yard has a minor traffic accident with a bus. Audrey gets off the disabled bus and Shannon gives her a ride to her destination. Shannon falls in love with her on sight.
The Queen of Finland is visiting the American Embassy in London. Shannon was there, keeping an eye on her priceless diamond necklace. While leaving the party, her necklace is stolen by Martin and Dora Elton. They are preparing to send it to Pierre, a fence, but are lacking a courier (Laker is now dead). They talk unsuspecting Audrey into making the delivery. As she makes the delivery, she and Pierre are arrested by Shannon.
Fast forward a year. Audrey is out of prison, and takes a highly-paid job from Mr. Malpas. It consists of rewriting his correspondence by hand. Meanwhile, nasty sister Dora is having an affair with Lacy Marshalt (Mr. Malpas' neighbor). Shannon continues to seek the lost diamonds, while Dora plots a way to get rid of Audrey.
Review: Well, this novel has everything thrown in. We have our leading lady, Audrey, out of jail and in the money from creepy Mr. Malpas, being paid a big wage to copy his correspondence out by hand. Malpas not only wears a mask to cover an apparent deformity, he lives in a large house full of electrical gadgets, microphones, a gigantic oriental idol complete with altar, secret compartments, secret passages, booby traps, and a revolving fireplace. Scary sounds occur in the night, and faces looking in skylights, and glowing green faces float around scaring people away. Bodies disappear and reappear! A mysterious limping man is always skulking around, of course. Piles of diamonds appear and reappear. Doubles and imposters!
A couple of big fat parallels jumped out at me immediately:
This book feels like one of the crazy titles from the Mystery League (which would appear about five year's hence). Enjoy it not for the depth of detection and figuring out the puzzle, but hang on for the wild ride through the spooky house at the amusement park, with every trope from the classic mysteries thrown in!
Posted by Rick Mills at 12:13 PM