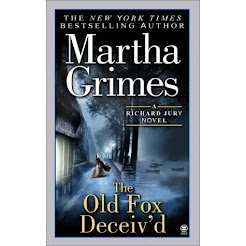 This is #2 of 25 books featuring Richard Jury. See this Wikipedia article for biography and list of the 25 Richard Jury books. Click this Martha Grimes label to see all my reviews of this series.
Major characters:
Locale: Rackmoor, England, a coastal fishing village
Synopsis: Rackmoor is an isolated fishing village clinging to some steep cliffs. It feaures two pubs (The Old Fox Deceiv'd and The Bell), a church, and not much else.  A woman has arrived in town claiming to be Dillys March, a long lost ward of wealthy Col. Titus Crael; and potential heir. Titus' son, Julian Crael, doesn't want anyone to share his future inheritence, and claims she is an imposter. There is some evidence - she seems to have a real identity of Gemma Temple of London; and some believe she has been coached to impersonate Dillys March.
Titus Crael hosts an annual Twelfth Night (eve of Epiphany) costume party. Gemma/Dillys lacks a costume, and borrows a mummer's costume from Lily Siddons. On her way to the party, she is stabbed to death as she ascends the steep Angel Steps. Lily claims that she was the intended victim, and the murderer mistook Gemma/Dillys as her, due to the costume.
Richard Jury and Wiggins arrive to investigate, and meet up with Melrose Plant. They find there is a history of tragic, accidental deaths in the village - Col. Crael's wife and other son, Lily Siddons' mother, etc.)
Review: Oh, this book just screams for a street map of Rackmoor. I tried to follow the layout in my head - no go - tried sketching it out, usually I can do that, but no. All those tiny streets and who lives where?
The setting of the foggy fishing village is well described, and seems very realistic and similar to those here in Maine.
I had been advised to read this series in order, and I see why. The characters from Book #1 are here and some more arrive. Aunt Agatha makes a short appearance.
An amusing episode is when Melrose Plant attempts to interview a prostitute, but she thinks he is a customer and continues to undress despite all his efforts to stop her.
Bertie Makepeace is a fun 12-year old, running the household on his own, and perfectly. Percy Blythe is an amusing old roof thatcher who ignores Plant but opens up wide to Jury.
I am glad my challenger friends turned me on to this series!
Posted by Rick Mills at 6:16 PM