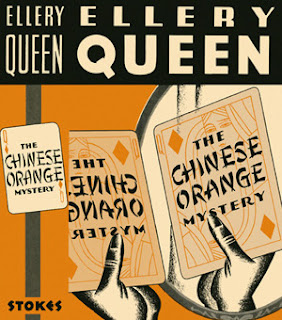 dustjackets.com
About the author: Ellery Queen is a crime fiction pseudonym created in 1929 by Frederic Dannay and Manfred Bennington Lee, and later used by other authors under Dannay and Lee's supervision. Dannay and Lee's main fictional character, whom they also named Ellery Queen, is a mystery writer in New York City who helps his police inspector father solve baffling murders. (from Wikipedia - full article).
Major characters:
Locale: 22nd floor of The Chancellor Hotel, New York City
Synopsis: Crusty old Dr. Hugh Kirk, his nurse (Miss Diversey), his son Donald Kirk and daughter Marcella Kirk all occupy a suite on the 22nd floor of The Chancellor Hotel, New York City. Donald is the owner of The Mandarin Press, a book publisher. He also maintains an office on the same floor to meet clients, and also pursue his hobbies of jewel and stamp collecting. He employs an assistant, James Osborne.
A caller comes to the office, but will not reveal his name nor business to Osborne; and chooses to wait in the adjacent anteroom for Donald to arrive. Finally Donald arrives, and they find the door into the anteroom locked from the inside. Entering by the hallway door, they find the caller murdered on the floor. His clothes have also been put on him backwards, and everything movable in the room (bookcases, pictures, etc). has been turned around backwards.
All efforts to identify the victim fail. Who is he? Who was the murderer? and what was the motive? 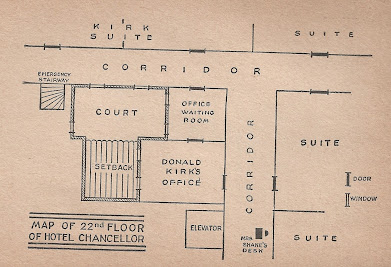 Review: Lots of Chinese items, lots of orange items, and lots of red herrings in this story. A sketch map is included in my edition, which is essential to following the events. Near the end, the traditional Challenge to the Reader is presented. I had read the story several times in the past, and remembered the bizarre setup, but could not remember the solution. Queen fooled me yet again. The solution is presented in step-by-step logic, and although quite Rube Goldberg-ish, it is fair to the reader and one of the better Queens having country names in the titles.
Also see this review by Bev Hankins on My Reader's Block.
Posted by Rick Mills at 6:25 PM