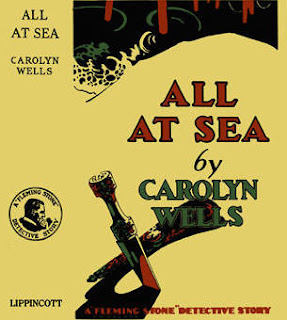 dustjackets.com
About the author: Carolyn Wells (1862-1942) was married to Hadwin Houghton, the heir of the Houghton-Mifflin publishing empire. Like Mary Roberts Rinehart, being in a publishing family created an easy pipeline for getting her works into print. She wrote a total of more than 170 books. See this Wikipedia article.
Major characters:
Garrett Folsom, big city lawyer
Anastasia Folsom, his sister
Roger Neville, his partner
John Ross, his valet
Ned Barron, the "copper king"
Madeline Barron, his wife
Angelica Fair, their guest
Croydon Sears
Robin Sears, his son
Carmelita Valdon
"The Duchess",  Helen Barnaby
Titus Riggs, architect
Locale: Ocean Town, New Jersey
Synopsis: The society principals are enjoying the beach at Ocean Town, New Jersey. Ropes are provided for the bathers to hold onto, so as not to be knocked down by the high surf. Garrett Folsom is knocked down and lets go, and when he comes up, he is dead. Those closest to him on the rope were Carmelita Valdon, "The Duchess" Helen Barnaby. Roger Neville, and Nad Barron.
One of the bathers finds a dagger in the surf, another locates a matching scabbard.
Garret's sister, Anastasia Folsom, arrives and immediately takes charge of the investigation in her domineering, bull-in-a-china-shop way. She enlists architect Titus Riggs as a detective. He finds an auction house on the boardwalk had sold several such daggers the night before. He finds that Garrett had a little side business of blackmailing people. After Titus gathers many facts, Fleming Stone arrives on the scene.
Review: Wells novels are usually pleasant journeys into a genteel yesteryear, but this one disappoints on several levels.
What could have been an interesting mystery was rather ruined by the vile character of Anastasia, who rolls over everyone and treats everyone, especially servants, like dirt.
Besides that, the characters are a bit - creepy. Anastasia is repeatedly referred to as 'manly', and physically described as such. Meanwhile, Garrett has a collection of a half-dozen "French dolls", which he carries with him everywhere, and talks to as he fondles them. Then it turns out the dolls are each replicas of various women he has loved in the past.
Fleming Stone does not get a chance to make his usual dénouement. He is no sooner interviewing some of the principals, when in walks the murderer and confesses, describing how it was done! Guess Fleming didn't need to make the trip after all.
Posted by Rick Mills at 1:14 PM