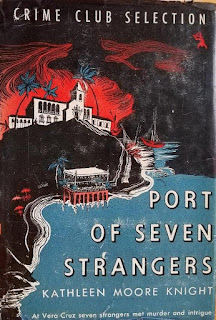 About the author: See this page on my blog Reading Katherine Moore Knight.
Major characters:
Ralph Herbert, a.k.a. Raoul Heribert, dead in the airport's men's room
Hotel guests:
Hotel staff:
Staying nearby:
Airmen:
Police Chief Sanchez
Locale: Vera Cruz, Mexico
Synopsis: Various travelers are converging on the Hotel Dorado in Vera Cruz, Mexico; just as the seasonal norté windstorms are due. One traveler never makes it that far, he is found dead in the airport rest room.
They arrive at the hotel. Gail Warren, our protagonist, is taken with Lt. David January, one of four airmen delivering airplanes in the region. All the men's eyes are drawn to stunning Norwegian blonde Lorel van Etten, having arrived via slow freighter with fellow passenger Carl Caspar, a refugee from Germany. She has a connecting room with Gail.
A scream is heard the first night. Lorel van Etten is found in Gail's room, standing over the dead body of Caspar. A mixup with the keys had given her the key to Gail's room instead of her own. But it turns out Gail had just been in the room, and since she neglected to turn on the lights, didn't notice the dead body - making her the prime suspect.
Lorel van Etten is also hiding some diamonds, and they get lost - or stolen - providing motives for several others.
Review:  This is one of KMK's formula Mexican intrigues, all of which feature an open-air multi-story hotel with wraparound terraces; a trashy blonde, a brunette in peril wrongly accused, and a handsome - but slightly suspicious - man working to exonerate her. Even though the pattern is the same, the books are still enjoyable for their portrayal of the lush surroundings and exotic settings. They remind me a lot of Mignon Eberhart.
The story is a bit predictable until near the end, when several Christie-like surprises happen. Some people are not what they seem. This wakes up the reader and provides a stunning conclusion. The dead man in the airport seemed to have been forgotten, but then he is brought in at the end as part of the plot.
* Try as I might, I could not figure who the seven strangers of the title comprise. There are more than that staying in the hotel. You can get seven if you count just the most significant characters I have marked (*) in the list above.
Posted by Rick Mills at 8:08 PM